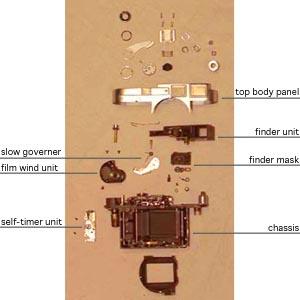 The growth in the PC market has been driven by the latest items that are the new hotness that will be old news in a matter of months. This PC-style economics has driven its way into the consumer electronics market over the past few years with items like the iPod and digital cameras.

For a while there has been a bit of a counter-culture against it with things like ‘low fi’ music making that takes advantage of older computer gear (check my friend Thomas Margolf’s site here for more information). In graphic design old style cut and paste collages, hand drawn illustration and 8-bit computer graphics are used to reference older and ‘cooler’ ways of doing things. Vinyl is the music format that refuses to die despite the best efforts of the record labels and has seen a resurgence through people like Simply Vinyl. It is with a certain amount of schadenfreude that I have observed over the past few years how record companies have alleged that digital piracy is hollowing out their business, when they gave away the keys to the vault in the 1980s by trying to force everyone to upgrade to CD in the interest of leaching every last penny from their back catalogue.

Publications like Make by O’Reilly Publications in the US has tapped into a pent up demand for people to be able to get back into their sheds and start tinkering about with their stuff again, something that the modern iPod or digital camera design does everything to discourage.

If Tony Glover is to be believed in his article ‘Sanyo Hit As Buyers Snap Up Second-Hand Cameras‘ for The Business there is a mainstream gadget backlash underway as consumers have tired of gadgets that are passe in a matter of months.

The pace of product replacement cycles has been set by the IT industry and there is a danger this will result in customer fatigue. Consumers are unenthusiastic about replacing expensive handheld products almost before they have learned to use them.

Evidence of this trend emerged last year with many consumers preferring to buy second-hand products such as vinyl records instead of CDs. Some retailers say the trend has begun to spread to digital cameras, with a growing number of customers buying second-hand classic cameras in preference to the latest digital marvel.

Conclusion: As my friend Heather would have put it: sucks to be a gadget-centric company like Sanyo and Casio (whose Casiology brand campaign is a painful exercise in trying to re-engage with the yoof market). It is good news for 21st century flea markets like eBay and Amazon’s Marketplace service.

I am not too sure if this consumer fatigue will stop at the latest techno-toys, I had lunch with some friends today. They are by anybody’s standards well-off. My friend was wearing a fake Panerai chronograph, so well made you could not tell the difference that he had bought from a replica watch website. He already owns a Rolex, and being able to afford the real thing was not the issue. It was more a kind of anti-consumerism, I have one good watch I find it hard to justify to myself why I should buy another?

Leave a comment and let me know what you think.