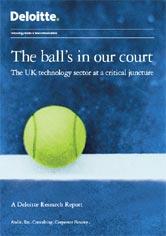 When I first saw this Deloitte report talking about the opportunities available to the UK my immediate thoughts about the language and imagery used in both the title and the front cover, were that the authors were trying to invoke the promising loser status of British tennis players like Tim Henman.

The ball’s in our court highlights the precarious nature of the UK technology sector, since the industrial age Britain has been on a decline in the global sense of technology leadership. We do have bright designers, made world changing developments and there are some bright sparks in the technology sector like Glaxo and ARM. However for every technological leadership success there are more high-profile failures: Thorn EMI, GEC/Plessey/Marconi and ICI to name but a few.

The report does not make surprising reading. Britain has been very successful in selling technology (which is essentially what Vodafone is), but hasn’t developed its own Intel or Microsoft. Qinetiq is cited as one of only two organisations involved in IT research.

Whilst the UK has a developed financial industry that does invest in technology, the reports measured criticism of the sector in supporting the technology sector will be familiar to anyone who has read the criticism of the short-termist approach to capitalism in the UK by the likes of Will Hutton. Venture capitalist outfits come in for particular criticism, the report says that they could do much better if they had the required industry knowledge to complement their financial skills

The report cited a decline in the past five years of UK headquartered technology companies that contrasted with the performance of foreign based companies:

You can read the full report here