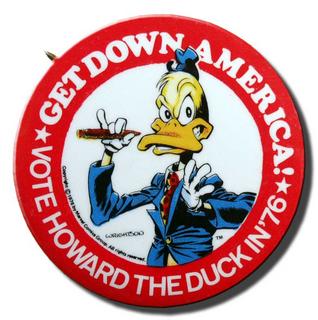 There are points in time that define society as we know it. The counterculture of the 1960s defined western culture in terms of individual achievement, respect for human rights, free speech. It pushed the bounds of visual culture and created whole new artforms in literature. A case in point is the ridiculous Howard the Duck cartoon character who was used by Steve Gerber to successfully lampoon 1970s America, post-Watergate and Vietnam through the counterculture mindset.

Some of the more surreal characters like Space Turnip and the giant bag of salt took their cue from 1960s psychedelic experiments. You can see more about Howard the Duck in this collection of the 1970s comics here in The Essential Howard the Duck.

History is a strange thing. The hippy San Francisco is now a sad psychedelic shopping mall of die dyed t-shirts and new age paraphernalia. The culture being blamed for everything from loosening modern moral values to the corrosive nature of materialism on society.

Having lived through and participated in the UK’s rave culture in the late 1980s and early 1990s as a clubber, DJ and promoter, I have seen a similar kind of thing develop, however property developers have done the rave generation a back-handed favour by redeveloping their icons like the Hacienda into a different format that could not get trapped into the tourist circuit. The cash-ins have largely been quite sublime, such as Warp’s very good collection of early house tracks 10+1 and 10+2. Matthew Collin’s book Altered State for me remains the best written book about this era.

Now the dot.com era is looking as if it may be starting to define itself in a similar way. Wired magazine, the Whole Earth Catalog of its day for the net generation has a ten-year netrospective (geddit) in its latest issue (Wired 13.08: 10 years that changed the world). Fortune has an interesting oral history Remembering Netscape: the birth of the net. The participants are rushing in to define their own place in history knowing that these articles will be the ones used by authors in the future when they write about how the internet changed the world. Again having played a role in that time, as a PR consultant working on a ‘new-chip to blue-chip’ client base as we called it at the time, I got an interesting overview of the sector and inside view of some of the major players. I am sure the future will be viewing this history through distorted vision based on the tinted recollections in these articles.