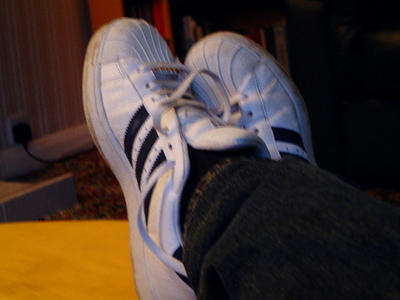 I remember reading once that Microsoft did research on the best way to move data around a business. Mass storage and a courier, ‘the sneakernet’ won.

Going through the latest series of TV show 24; despite the latest Cisco gear, the tech agents use CDs and DVDs to move data around the CTU facility.

So its no surprise that the RIAA has finally woken up to the fact that P2P networks aren’t as huge a threat after all, but it was evil CD burners all along.

Copy protection is the only way to stop customers stealing from the music industry. The only way to protect consumers becoming criminals…

In the meantime, the music industry is being hollowed from the inside out as its campaign against downloaders has been a massive publicity stunt for Apple’s iTunes Music Service; everyone now knows what an MP3 is and that it allows blank CD can now hold 64 CDs worth of pirated content.

“Burned” CDs accounted for 29 percent of all recorded music obtained by fans in 2004, compared to 16 percent attributed to downloads from online file-sharing networks, said Mitch Bainwol, chief executive for the Recording Industry Association of America.

The data, compiled by the market research firm NPD Group, suggested that about half of all recordings obtained by music fans in 2004 came from authorized CD sales and about 4 percent from paid music downloads.

“CD burning is a problem that is really undermining sales,” Bainwol said in a phone interview before addressing about 750 members of the National Association of Recording Merchandisers in San Diego on Friday.