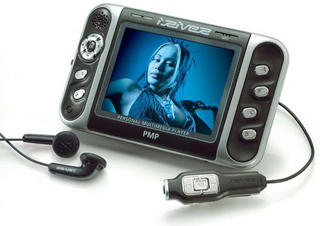 Market analyst firm Instat has come out with a report that says the market for personal media players will remain ‘disappointing’.From their press release:

A recent report by In-Stat found the following:

The report title Video Content Availability Will Be A Key Factor in Portable Media Player Growth basically is an admission that PMPs are currently a device without a use. Think about it, whats the point of going through the hassle of ripping a video off a DVD to watch it on an awkward iPod type device that is more expensive than a portable DVD player hmmm.

In addition video is an immersive format so the scope to use it is less than listening to audio devices like the Apple iPod.

So it looks like iRiver won’t be selling all that many PMPs, even with a fine young lady draped across the screen like the picture above.