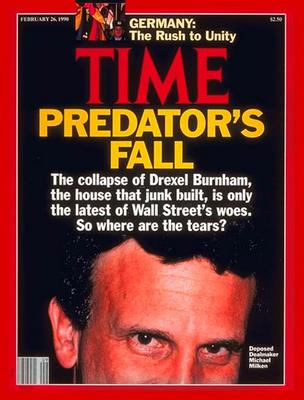 While I was busy worrying about the right adidas tracksuit top to wear, where I could get the latest Street Sounds electro album, and how to avoid going into school the US stock market was been shaken up by green mailers and heavily leveraged buyouts. The theory goes something like this, business were not being worked hard enough to deliver a return on investment. So professional investors would look to buy up companies at below the sum of their assets.

This purchase would be paid for with debt, selling off assets or by cutting costs (people) within the business. They would do away with non-core activities like R&D or employee benefits.

Often the management of the ‘prey’ corporation would pay off the investor to go elsewhere in a crude shakedown called greenmailing. The debt aspect is more interesting. Apparently the high level of debt in a business would motivate the management by fear to deliver better returns than previously achieved. Broadly speaking there is two types of company debt that can be purchased and traded:


Michael Milken and investment bank Drexel Burnham were the past masters at selling junk bonds. Milken realised an essential truth in the markets – that junk bonds were often not at the level of risk that their repayments would indicate. This discontinuity provided an excellent investment opportunity, which is what Milken sold to his investors. When he had a willing pool of investors Milken could then shovel out junk bond issues.This helped stoke the fires of the 1980s buyout boom. Milken and his driven personality along with peer Ivan Boesky defined Wall Street to the media influencing Michael Douglas’ performace as Gordon Gecko and eventually making them marked men for an attorney general on the rise with politics on his mind (former New York mayor Randoph Giuliani.

I managed to complete the Predators Ball: The iside story of Drexel Burnham and the junk bond raiders by Connie Buck, which provided a good primer on this time. Milken came across as the puppetmaster moving companies and people around the board like chess pieces to provide maximum return for him. You can find it on Amazon here.