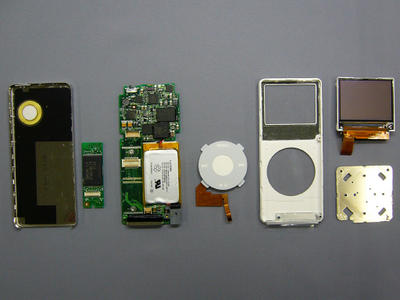 Many people have been impressed by the svelte nature of the new Apple iPod nano. This Japanese site is the first one to disassemble one.

The first picture is the inside of the back case. It has some sort of foam insert to protect the circuitry and make sure that nothing rattles about. It would rest on the back of the main circuit board. The foam is cut away to leave room for the battery pack, the back could also act as a heat sink for the battery to dissipate the heat generated as it discharges. The round spot is a piezo electric loudspeaker for operational signals like a low battery.

Next up is the flash memory module. It is encased inside the black chip packaging at the middle of the board. In this case its a Samsung made 4GB module. This board is attached to the front of the main board with a couple of screws.

The most prominent feature of the main circuit board is the lithium ion polymer battery which takes up a third of the space. This is connected to the circuit board by soldered cables rather than a clip-in connector making it not not user servicable for the average man in the street. At the bottom of the board is the connector for power, headphone socket and data exchange between the iPod and the iTunes enabled Mac. One of the ways that Apple has managed to make the device so small is by putting all these connectors together at the bottom of the iPod nano rather than a headphone socket at the top and everything else at the bottom. There is some usability issues in doing things this way, but Apple must have felt that these were more than worthwhile in order to produce the end product.

The scroll wheel is connected to the circuit board by a ribbon connector, since it is sold state it takes up virtually no space. It is held in place and given a solid feel by a metal backing plate mounted to the back of the device facia (this is on the bottom right of the picture below the colour LCD screen.

The device has a low component count, helping to keep costs down partily by having a very sophisticated design.

Kudos to Impress Corporation for the teardown photo.