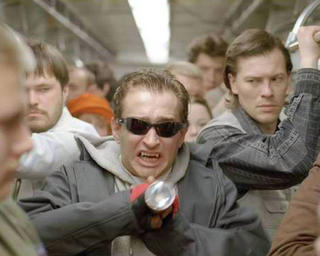 Stephen and myself finally got to see Night Watch, the first film in a trilogy of a Russian made fantasy battle between good and evil. The film has a very different aesthetic to other films, though you can see how comparisons will be drawn with The Matrix.

The film is thoughtfully put together and the CGI effects used are subtle rather than in your face Hollywood style. The acting performances are all well done.

The intelligence of the story will please the chattering classes of the art house fraternity, comic book fan boys will appreciate the subtle humour (like a boy who had been chased by vampires sitting down to watch Sarah Michelle Geller in Buffy the Vampire Slayer) and the great unwashed in the multiplexes and Blockbuster video stores will find the action enough to keep them interested until the next Vin Diesel film comes out.

When I wrote about the rise of creative industries outside western Europe and America last year, I missed out on the quality product coming out of Eastern Europe which was a mistake. I cannot wait to see part two in the trilogy ‘Day Watch’.