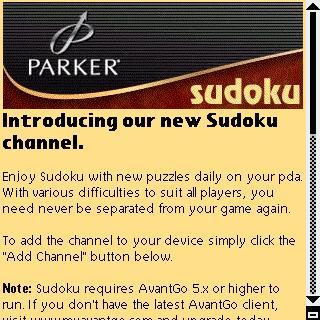 Parker pens have done an interesting marketing tie-in, sponsoring AvantGo’s Suduko channel. This promotes Parker pens to people with the disposable income on one side, and by all accounts is a bit of of Javascript tour-de-force.On the other hand it encourages consumers to conduct an activity on a PDA or smartphone that they would otherwise be doing with a newspaper and pen.

Having commuted in over long journeys by train, I was aware that many more people read the newspaper than used electronic data devices.

A quick rundown in a carriage where two dozen people would have been visible to me:
The first two groups are work focused so point point in doing outreach

This lot would be leisure orientated

Sponsoring a newspaper Suduko newspaper competition or giving away a free Suduko book with every pen bought would have been a better way to capture eyeballs and users for Parker pens than the AvantGo channel.

Kudos to PalmAddicts for the heads up on the Suduko channel.