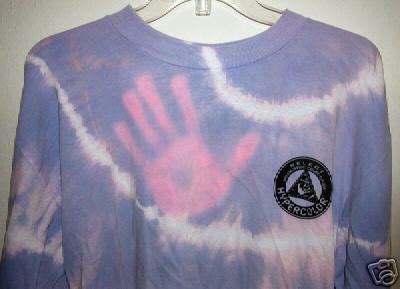 When I was a teenager just before the whole rave thing really took off some of the sportswear shops in my home town of Birkenhead stocked a range of surf wear: Think Pink, Ocean Pacific as the ‘No Fear’ or Oxbow of their day.

The brand that stood out the most was Global Hypercolor. Global Hypercolour was fabric specially died with a heat reactive pigment, giving a kind of dynamic tie-die effect.

The pigment lost its properties over time and the fabric had the unfortunate side effect of showing just how warm you were at a rave, club, blues, shebeen or warehouse. Not surprisingly they died out in the early 1990s. Now a company called Bodyfade is trying to resurrect the concept.

Over on the Wired gadget blog, some people have put thermochromic technologies to better use, putting colour changing lids on a coffee cup. You have a ‘smart lid‘ that give a visual warning of when people are likely to scald themselves with a sip of hot java. Its one of them them duh why ‘didn’t I think of that’ idea When I worked for a looooooong six weeks as a crew member at a McDonalds drive thru, scalding coffee was a major concern and there was a legal disclaimer on the side of every cup. Could a smart lawyer prove that McDonalds had a duty of care to go with these new lids? If so they could be as big a money spinner as Tetrapak cartons.