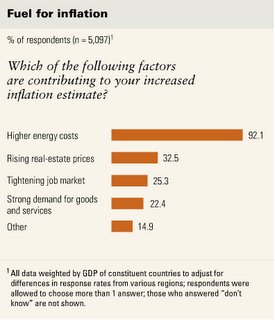 McKinsey the management consultancy has polled a large number of business executives worldwide to find out about what they thought about inflation and pricing changes on their businesses in the next 12 months.

First of all there was a large consensus on price inflation of about one per cent over the next year. This is going to be driven by higher fuel prices. Interestingly the executives felt that their businesses could not pass on these price increases to their customers. Businesses will be coming under pressure with increased competition particularly prenounced in the most profitable marketplaces. The fear of competition in the global marketplace means that businesses are afraid of passing on the price increases to the competition.

Folks over on the Digg discussion boards have found a pretty fundemental weakness in Google Books, try it here.

Chris Charron of Forrester Research came up with some interesting ideas on converged gadgets. DEVICES, MEDIA, & MARKETING FIRST LOOK (December 6, 2005). Chris thinks that the mobile phone could replace the iPod, but that the Blackberry will not replace the laptop of a roadwarrior.

Chris and his colleagues have come up with some sensible i thoughts about multi-function devices. It is insightful to me that many of these things have to be articulated for these manufacturers in the 21st century, given the vast library of mistakes that can be learned from in the technology arena : No. 1. Don’t obfuscate the core function of the device. Learn from the mistakes of the iPod photo — focus on your device’s primary function and market additional capabilities to consumers who are already sold on the core purpose. Although the iPod retained its photo-viewing capability, the return to the simpler iPod name restores the device to its true intention: music.No. 2. Only add functions that don’t detract from the core application. Although they don’t detract from voice functions, camera phones — with their low resolution, hard-to-focus lenses, and small screens — won’t replace consumers’ standalone digital cameras. But there are distinct times when consumers will opt for their camera phone: when they want to quickly share a photo with friends (26%) or when it’s the only camera they have with them (37%).

No. 3. Price multitasking devices based on primary markets. Smartphones — those handy devices that allow consumers to combine a portable voice device with productivity functions — appeal to a wide range of consumer segments. Audiovox’s SMT 5600 might appeal to a more mainstream voice consumer who desires a richer mobile experience enabled by a familiar Windows OS. However, Palm’s Treo 650 — with its QWERTY keyboard and proprietary Palm software — appeals to businesspeople who wish to be constantly in touch via email and SMS. These devices are priced accordingly: The SMT 5600 targets the average consumer at $150; the Treo goes for the business market, priced at $299 and up.

No. 4. Watch users carefully. In his book Democratizing Innovation, Eric von Hippel cites that depending on industry, 10% to 40% of customers modify products for their own use. Keeping a close eye on the habits of these “lead users” is critical to innovating quickly and avoiding the risk of multifunction overload. One interesting example is the iPod shuffle. After seeing that lead users of the iPod were using the shuffle feature with great regularity, Apple decided to actually strip down features to better serve these users at a lower price point. This is a great example of consumer-driven innovation — going against the multifunction device tide — with great success, by keeping a close eye on users.