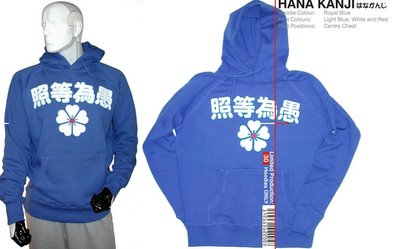 British designers Terratag have got some new funky threads for all you folks mourning the departure of Burro. Their work draws on a number of influences including anime, manga, technology including giant robots and graffiti.

The picture is one of their hooded top designs using a mixture of Kanji script and traditional Japanese imagery with a thoroughly thugged-out cut of a sweatshirt in Crips blue for all y’all ‘bangers out there that want to roll in style.

Also check out their wall hangings that mix graffiti and traditional Japanese calligraphy.

Whilst we are on the subject of giant robots and other non-human cultural artifacts there is an interesting article over at Slate.com that talks about how increased realism in games has reduced user enjoyment and character empathy and created gamer discontent.

Jargon WatchUncanny Valley – Empathy with gaming characters drops off as they come to a point were they look as if they are close to being real. Our perception of them moves from character to something more disturbing like the undead, and can be become repelled or disgusted. The dip in postive consumer attitude as the character better mimics human life is the Uncanny Valley. The term was originally used to describe a similar human reaction to robots in 1978 by Dr Masahiro Mori.

Paradox of Realism – after a certain point, the closer to reality that the gaming experience gets in terms of graphics and player experience; the harder it is for the game to seem real. This inability to believe makes it harder for the players to fully engage in the game.