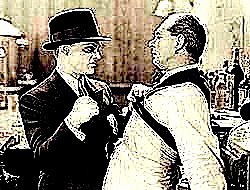 Bloomberg has a report on how politically-minded New York district attorney Eliot ‘The Enforcer’ Spitzer is investigating anti-trust behaviour by the major record companies surrounding price fixing of digital music. The news came out after a subpeona was served on Warners Music. In the todays climate this may be hard to prove, which is why rc recommends that he just goes for the big legal guns and puts them up on the RICO charges they so richly deserve. “We are selling our songs through iPod, but we don’t have a share of iPod’s revenue. We want to share in those revenue streams. We have to get out of the mindset that our content has promotional value only. We have to keep thinking how we are going to monetize our product for our shareholders. We are the arms supplier in the device wars between Samsung, Sony, Apple, and others.” – Edgar ‘We’ll make them an offer they can’t refuse’ Bronfman A bluffers guide to RICO – English readers can find out about the full power and wonder of RICO by reading

Howard Marks’ autobiography Mr Nice, however for those of you that can’t be bothered: Under RICO, a person or group who commits any two of 35 crimes—27 federal crimes and 8 state crimes—within a 10-year period and, in the opinion of the U. S. Attorney bringing the case, has committed those crimes with similar purpose or results can be charged with racketeering. Those found guilty of racketeering can be fined up to $25,000 and/or sentenced to 20 years in prison. In addition, the racketeer must forfeit all ill-gotten gains and interest in any business gained through a pattern of “racketeering activity.” The act also contains a civil component that allows plaintiffs to sue for triple damages.

Meanwhile over the far side of the Atlantic

EMI is being sued by Apple Corp. for not paying The Beatles for all the music that they have sold; this is what is known as piracy or intellectual property theft on a grand scale. The case is over some 30 million GBP worth of material sold. Piracy is not only the preserve of organised crime and IT-literate teenagers, but also rapacious record companies. This is not a new phenomena, but endemic within the industry judging by exposés such as Autumn of the Moguls by Michael Wolf and White Powder, Black Vinyl by Simon Napier-Bell.For a bit of light relief we recommend this honest business clip-art collection from the merry pranksters at London design shop Now Wash Your Hands.