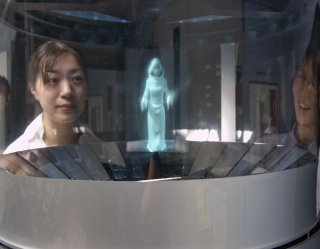 It looks like this team of US and Israeli geeks must have been Star Wars fans. According to EE Times they are looking to create nano projectors: a bright low power projector that would allow high quality images to be displayed at an infinite focal distance making viewing a more enjoyable and less tiring experience.

Kopin, Israeli group focus on nano-projectors John Walko
EE Times
(01/03/2006 12:03 PM EST) LONDON — Microdisplays specialist Kopin Corp. has teamed with Israeli group ExPlay to develop a nano projector for portable, hand-held devices. Under the $2.2 million program, partially funded by the BIRD Foundation, Kopin (Taunton, Mass.) and ExPlay (Herzelia) aim to come up with a projection engine with target optical efficiencies nearly 10 times higher than those currently available. The companies say they plan to introduce a working projection engine during the first half of 2006.BIRD is an acronym for Israel-U.S. Binational Industrial Research and Development. The Foundation’s mission is to stimulate, promote and support industrial R&D of mutual benefit to both countries.

“We have engineered the display pixel technology to increase the effective optical aperture and transmission, which significantly increases optical efficiency. We believe our proprietary compact, highly transmissive microdisplay combined with an unique optical engine technology from ExPlay should enable an ultra-compact nano projector.”

Key to the success of the development, according to Golan Manor, ExPlay’s vice president for technical marketing, is “a tight combination of a high-transmission microdisplay and a specially designed optical engine in an easy-to-integrate package.”

Dr. John Fan, Kopin’s president and chief executive officer stated: “With burgeoning markets in mobile video, portable gaming and hand-held devices such as PDAs and video cellular phones, there will be a significant demand for high-resolution microdisplay systems to compliment these products. We believe a cost-effective, high-performance nano projector will be a reality in the near future.”