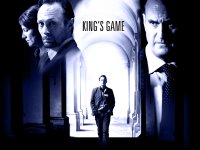 Kongekabale or Kings Game in English is taunt Danish thriller in the same type of genre as Wag the Dog, Defence of the Realm and All the President’s Men.The film tries to illustrate the unholy power alliance between journalists, lobbyists and politicians and how the pieces are moved around the board for personal gain.

Because the film is based in Denmark it seems more shocking but in reality when we reflect on the kinds of things that have gone in UK politics the film is pretty tame.

I could just see it know, a film based around the Brown-Blair rivalry with Peter Mendellson having a role and the dark majesty of the Alistair Campbell character portrayed by Alan Rickman acting everyone else off screen.

Or if we didn’t want anything too close to now, how about a dark portrayal of the miners strike?

With a government wanting to subdue an industry by any means necessary and an egotistical political union leader willing to give them the mother of all battles that they desire.In the process the lives of thousands of families are destroyed.

Kongekabale tries to hold a mirror up to challenge society not to get sold out by its mandarins and media barons, in reality the sale happened years ago.

Entertaining, and well shot but the message of Kings Game is way too naive for British society.