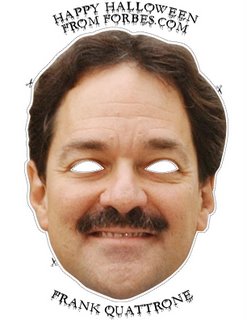 Frank Quattrone got leave to appeal his conviction earlier today, whilst overturning his conviction would be a vindication for him and be a sense of relief to family and close friends he has already been sentenced and found guilty.The NASD have punished him, his career as a banker finished and those who used to associate with him scattered to the four winds for fear of being tainted by association.

Quattrone ultimately was punished for the sins of the many:


Quattrone is a sinner: particularly against style and fashion if you have a look at his ties and the John Holmes moustache, but we should not ignore the plank in our own eyes when looking at the thorn in his.

The judges finding on Quattrone’s appeal is here. Kudos to the San Jose Mercury News.