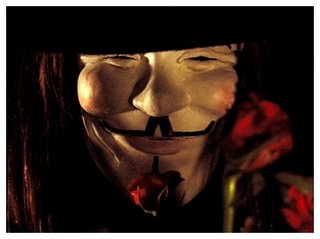 I paused for a few days before writing this review of V for Vendetta because of the polarised views about the film. People who like it are accused of being fan boys, the people who dislike it are alleged to be blind. The truth is somewhere in between.About V

V for Vendetta was imagined by a disillusioned Moore who was living a mid-1980s Britain very different from the present day. The cold war raged on in Africa, the Middle East and Afganistan.

AIDS was a scary new illness and the red-tops were calling for carriers and high-risk groups like homosexuals to be put in ‘detention camps’. We had race riots in Brixton and Toxteth and there were allegations of a shoot-to-kill policy against the catholic minority in Northern Ireland.

The Sunday Times magazine ran a photo-journalism story about how unemployed men in Birkenhead were making ends meet by scrabbling around the municipal dump of Bidston Moss looking for scrap to sell on. And the forces of the state were let loose on mining communities to break the organised labour movement. Violence by police officers captured and shown on the TV news was considered to be inadmissible evidence in cases were charges of police brutality had been brought.

Meanwhile the UK took its first steps to becoming the world’s surviellance capital with the widespread installation of closed-circuit television in most major towns.

In the words of Moore the country had become ‘mean-spirited’ and he thought about moving abroad.

Where it falls down

Why do they hate V so much?