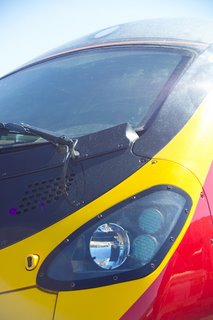 I went home for the weekend to see the folks in Liverpool, I had not been on Virgin Trains for a good while and went on one of their new tilting ‘Pendolino’ trains.Whilst Virgin have tried to give passengers the airline treatment with radio and air conditioning that actually works, the big boon for me was the humble three-point socket under the table which allowed me to plug in my laptop and spend a productive few hours going there and back.

It’s a brutally simple idea. Trains are usually powered in two ways: electricity or via a diesel engine. With an electric train how hard is it to allocate some of the electricity to a step-down transformer and provide 240V 50Hz to passenger seats?

Diesel isn’t as hard as you’d think either. Diesel locomotives are usually known as diesel electric, the reason for this is that in order to transfer the enormous amount of power to the axles would take an exceptionally robust transmission systems so trains have a generator hooked up to the engine instead and each axle is fitted with a giant electric motor. So in essence a diesel train is an electric train with its own power station on board.

Now if someone could apply themselves to consistent cell phone reception on the mainlines and in-carriage wi-fi, trains may represent a more viable proposition for business and leisure travel again.

1 thought on “A dreadfully simple idea”