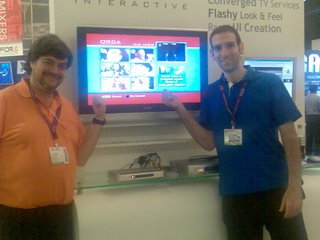 I went to see two films this morning with Steve; DOA and Children of Men.DOA is a film based on a game, that looks like a game, has a game-like plot and visual language with level-transition splash screens but no interactivity – what can only be described as a poor user experience.

The film is awash with acrobatic young women, CGI and wire work.

Unfortunately the film does not have the complex cues and social interplay now prevalent in popular script so comes across as a hyperactive childrens programme. Whilst DOA stands for Dead or Alive, it could also easily stand for Dead on Arrival (at the box office).

We also talked about the challenges I was facing getting the SMTP server connection on my mobile phone over the Orange network and led on to an interesting discussion about user experience.

Later I touched base with my friend Uri in Israel to wish him a happy new year and catch-up with his activity. He had been with Orca Interactive at IBC in Amsterdam promoting a music channel and interface that allowed access in one-click – a state that many companies would love to match.

Uri mentioned an interesting and revealing statement that ‘user experience’ was a specialist area and expensive to do, yet we are all users and have all felt the painpoints of home video equipment that is hard to programme, used a poorly designed website or the struggle to master new features on a cell phone?

Children of Men is a dark film that hits on many of the themes that V for Vendetta hit upon and that Bruce Sterling has discussed in a short story for the latest edition of New Scientist. It is worthwhile seeing for for Michael Caine’s best performance in years as a weed-growing hippie pensioner with a wife suffering from Alzheimers.