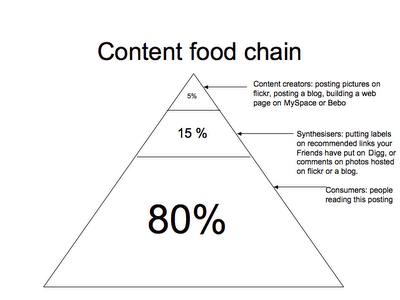 When I worked at Yahoo! Europe, I had the chance to meet Eckart Walther on a press trip to the corporate mother ship in Sunnyvale. When discussing the difference between conventional web search and social search provided by the likes of Yahoo! My Web, delicious and Digg; he talked about the tyranny of the minority.The tyranny of the minority is where webmasters via their outlinks to other sites processed through Google’s page rank and other similar processes determine what sites we see when we use web search.

Social search was supposed to lead to a tyranny of the majority were user-generated outlinks provide a form of consumer emancipation. However, having listened to Peter Morville‘s speech at O’Reilly Emerging Tech conference over at IT Conversations, I started to think about this concept again.

Social search is still the tyranny of the minority, possibly even a smaller minority. I heard Bradley Horowitz break down web users into three broad groups: consumers, synthesisers and creators, which he presented via the image I have recreated above. So we have replaced a theoretical minority with a constituency of five per cent or less with one that draws on up to 20 per cent of the online population.

However, like Google page rank were not all votes are created equal, but links from important sites carry more weighting you get a similar effect social search. This is the reason why Jason Calacanis was interested in poaching the top 12 Digg-ers for the new social search component of Netscape.com.

Social networks are built around people who are super-connected, in addition if you get some of these super-connectors who are also creators or synthesisers then you have a much more heavily weighted vote.

For example BoingBoing has a readership of over well over a million every day. I will bookmark some of the sites that they recommend, as will many of the other people who use MyWeb so that you will have tens or hundreds of people with the same book mark. That isn’t a heavy vote, its swinging an electoral ward like Boss Daley in Chi-town.

Or that the top ten Digg users are responsible for 30 per cent of home page stories. Or the network of emails that flies around between prominent bloggers with ideas and links for each other.

No I am not saying that there isn’t value in social search, but I wonder how much there is for Joe Six-Pack who isn’t a web early adopter? Does it mean in real terms that public web will get smaller as millions of pages of content are ignored?

From a PR perspective it means that we have a new media – influentials that are considerably less numerous than journalists, who may not realise their status for a particular area and that we may have trouble getting in touch with.

It is easier to contact bloggers because they can be found but how do you get in touch with your most influential linker on del.icio.us, Digg or reddit? What is ethical behaviour and what inducements can be offered?