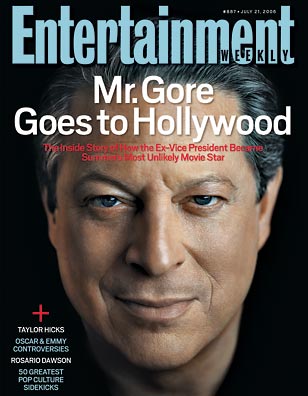 I went to see An Inconvenient Truth. This is a film made by Al Gore which intersperses his presentation which he routinely gives on climate change and the story of Gore’s own journey to environmentalism. I had some observations which I have noted below in a number points in no particular order.The Good
Gore has managed to make his lecture a worthwhile experience to watch, which is a rare achievement.

Where the lecture touches on the way humans continually fail to understand non-linear or dynamic systems really struck a chord with me.

It’s the reason why Yahoo! Research and O’Reilly Media run the Research Buzz Index and why DARPA tried to introduce the market-based regime dead pool as a predictor of terrorist activity and intent.

The end of the speech highlighting why people shouldn’t shrug global warming off as something they can’t change I found particularly influential.

The Bad
The film missed an opportunity to discuss how long-term carbon emissions can be reduced through increased reliance on nuclear and alternative energies. There is also a compelling economic argument for reducing carbon emissions. By reducing resource consumption for fuel we are sparing these resources so that they can be used as chemical feedstock over time for medicines, plastics and other advanced materials that can improve our life, minimise our impact on the environment and still spur economic growth.

Gore points out how a sample was taken of academic papers and none of them disputed global climate change. However in doing so he did leave him open to criticism: peer review is notorious for enforcing orthodox thinking. By going against orthodox thinking scientists risk losing their funding and or tenure. In brutal terms, they risk losing the ability to provide for themselves and their families. I think that on balance Gore is right, but he left himself open.

The blog to support the film is a model example of how not to do a corporate blog. It is more like a bulletin board and has no personal feel. All the posts seem to be done anonymously. This was a bit surprising since in other ways the film seems to have been very savvy in its online presence to facilitate word-of-mouth marketing.

The Cynical
The film looks in part like a campaign video for some future Gore White House ticket, especially when the film reaches back to personal tragedy in Gore’s life. Maybe its a cultural thing, me watching a film very much aimed at an American audience through my European cultural looking-glass.

Product placement: Gore is on the board of Apple Computer Inc. The company makes fantastic products, hell I use them, have done for the past nigh on two decades; but the first five minutes of the film had footage that was a product placement persons wet dream. Was this the catalyst for the current hate campaign against Apple by environmental ambulance-chasers Greenpeace?

I didn’t see Gore once use a light transit system or any form of public transport (apart from taxis) in the film.

The Unfortunate
Ultimately the audience for this film will be self-selecting, it won’t reach into the less progressive heartland of America that it needs to impact in order to facilitate change. How do you turn the media’s answer to J Edgar Hoover: Rush Limbaugh green?