At the beginning of the year Twitter CEO Jack Dorsey alluded to a possible change in the 140 character limit to 10,000 character Twitter posts. Dorsey didn’t have far to look for this innovation.

In common with most Twitter ‘innovations’ the idea of 10,000 character Twitter posts came from Weibo, here’s one that Emma from the team I ran in Hong Kong created for our client at the time. CIVB is the marketing body for Bordeaux Wines.

This one was for Singles Day in China. Single’s day is a huge shopping day, held on November 11 each year (all the 1s) 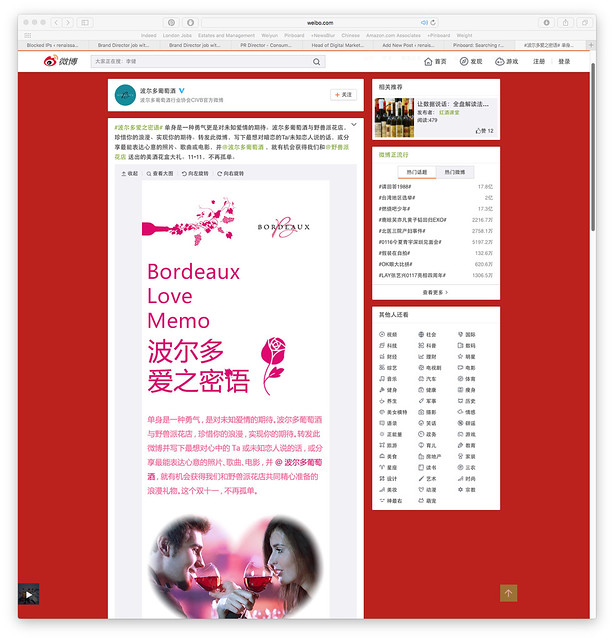 They have proven to be very effective for marketers in China when Weibo was at its full power. We would spend time creating text dense infographic type images, so it didn’t contribute to the searchable data on Weibo. Jack Dorsey’s response to the public disclosure of the 10,000 character was on a similar kind of essay in an image. 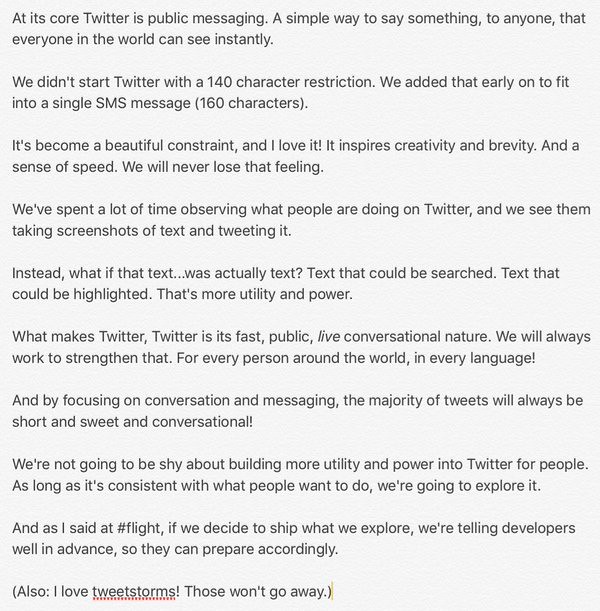 Of course something that’s being effective in China, doesn’t guarantee success elsewhere. The writing system of Chinese means that you can be more expressive in a 140 characters than you could be in western languages like English, Spanish or Finnish.

The types of languages don’t guarantee success either. Weibo hasn’t been as successful in Hong Kong, but Facebook and WhatsApp is ubiquitous. On the other side, Facebook doesn’t do terribly well in Japan and it has been a rare success story for Twitter.

Whilst the product of Weibo is similar to Twitter, the context of Weibo is very different. It is not a reliable predictor of success for Twitter going to 10,000 characters.

Will McInnes of Brandwatch outlined some of the pros and cons as he saw them.

Reading through Will’s points, some of them seem to counteract each other, representing either, or scenarios. Will eventually errs on the side of negatively pointing out that a longer word count hasn’t helped Google+, or got more celebrities using Medium.

There are a whole host of other reasons not to use Medium and other reasons why Google+ hasn’t been the social platform that Google originally envisioned.

The more positive views from agencies revolves around more contextual information gained from longer posts. That really depends on how the Twitter firehose scales to address it.

Judging by the use of Weibo, just because people can publish 10,000 character posts doesn’t mean that we’ll suddenly be deluged with War & Peace in our feeds. On its own it probably won’t be enough to pick up the four quarters of no growth that Twitter has experienced in the US, but it might get the creative juices of marketing agencies going. More on Weibo here and more on Twitter here.