Back in August Google started to roll out changes to its Keyword Planner tool. Users who did not have an active AdWords campaign running on there account would no longer get search volume data. Instead an indicative range appeared. 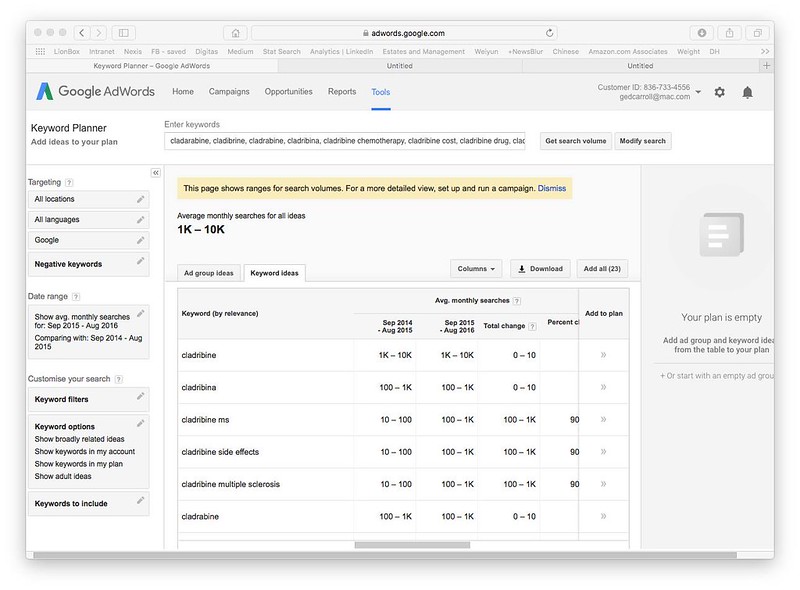 Search volume as a directional metric is important for both online and offline communications:

Now PR people and branding specialists need to have access to an account with a continuous advertising spend running. Even if they aren’t doing any online-related work themselves.

The road to paid media only access has been a long one: KeyWord Planner had been announced in 2013, a result of Google rationalising some of the existing tools into one. Keyword Tool and Traffic estimator merged. KeyWord Planner was notable for requiring an AdWords account, this was a noticeable change and not too subtle hint from Google.

Unlike other product changes this latest ‘enhancement’ was not announced on any of the Google product blogs like Inside AdWords, but instead was acknowledged retrospectively by a Google spokesperson answering a question from Search Engine Land. It has been up to the community to explore the full implications.

One aspect is that if you reduce your Google advertising spend, you lose access to the data. So, PR, branding and SEO become inextricably linked with PPC advertising.  Critics could accuse Google of abusing its market power with 95%+ share of search in Europe; but Google would argue that it has had to move this way because of bad actors. Secondly, since the service had been provided for free since it was launched at the end of 2008, there is never any guarantee that it would be free to use.

Google now has antitrust investigations coming at it in markets around the world, they probably just don’t care any more and its all about profit maximisation. If one looks at the Alphabet Group overall, Google is the obvious cash cow.

However it is ironic now that Russian search engine Yandex via its Wordstat tool provides better free information on search volumes than Google.