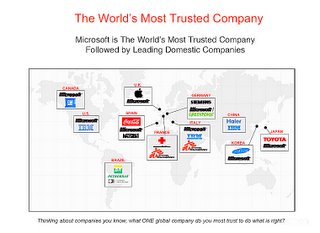 I got up early on Monday to go Edelman’s seventh annual Trust barometer roadshow thanks to an invite from Richard Edelman and Dr Stuart Smith. There was some interesting items that came out of the research conducted by their StrategyOne division. The rise of bloggers and individuals as pundits was a cornerstone of their presentation. People want to hear from their peers rather than a CEO, or a PR person and blogging is a key facilitator of this trend.This means that the standard ‘command and control’ way of corporate communications and dissemination of messaging has to adapt and yield to cope with these new company ambassadors.

Surprisingly, one of the speakers admitted that corporate reputation wouldn’t necessarily damage sales all that much, (with Nike’s success as a trainer manufacturer cited as a prime example). However, trust in a company and hence the company’s resistance to market shocks would be affected.US companies were seen to be less trusted by Europeans a so-called trust deficit. Where a company was from (headquartered) was seen as a key factor in how much trust we had in it. So if you’re setting up your Global MegaCorp, register it in Germany or Canada as these countries were universally trusted.

Edelman client Microsoft was considered the world’s most trusted company, despite the anti-trust ruling, Windows viruses, spam mail, spyware and software patches. Key to this shift was the repositioning of Bill Gates as human being with appearances on Live8 and Buckingham Palace collecting an honourary knighthood. I guess that means that there’s hope for a even poor sinner like Jim Bakker being redeemed in the public eye ;-).

Noticable by their absence, online brands had NO unprompted recall amongst those surveyed indicating that the giants of the web need to do more to build brand equity and trust amongst consumers.

More traditional technology companies benefited from a positive attitude and a lack of baggage like obesity for food companies, or global warming for energy companies. Though I couldn’t help but wonder how long is it before the likes of Greenpeace puts e-waste on the agenda with Dell and Apple in the dock?

Media and entertainment companies had a low level of trust, but are still relied upon as providers of trusted information.

I got buttonholed by a PR manager from a breast cancer charity who wanted to find some one with expertise about blogging so I gave her my business card. I am sure that she will be also availing herself of Edelman’s pro-bono consultancy carried out through the Media Trust.

Blogging seems to have worked corporate communications managers into a bit of a frenzy in the same way that webcasting did seven years ago. Things are about to get interesting…

On another note, it looks like Richard Edelman is about to start podcasting.