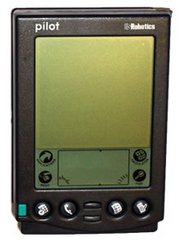 The Good Morning Silicon Valley newsletter carried a story about Palm’s largest shareholders asking the company to sell out to another player while its fortunes are still on the rise. This raises concerns about Palm’s roadmap and vision if even their largest shareholders don’t believe them. Why sell out?Palm has a number of challenges to overcome:

A lot of the heat in this discussion centres on Research In Motion, Nokia and Apple.

Research in Motion has never had the best product design and user experience, Palm could help them.

Palm’s pen computing experience could be invaluable to Nokia.

Apple is the collectively the player considered by technology pundits the people who can make a market work and has the expertise and chutzpah to make change the game devices work. Palm could bring carrier relationships and expertise.

Palm has a strong brand its name has been a by-word for PDAs for a long time. The Treo has made a name for itself amongst early adopters and has proven itself to be more adaptable than the Blackberry. Its product design has made it a success that has saved Palm up to now. However, much of the crown jewels within Palm (its distinctive look and feel) marched off with PalmSource acquisition by Access and even then there was a lot of work to be done to assure the future of the PalmOS as a modern platform.

OK, first of all there is the question of whether Palm needs to be sold: probably not, but a shot of energy, vision and cajones in the management team wouldn’t go a miss and this shareholder action may be the boot in the backside that they need. Bottom line is that this question can get kicked back and forth for a long time to come, what’s more its an emotive area so don’t expect a consensus soon.

If a ‘for sale’ sign went up, Palm may get a buyer, but I would expect the purchaser to come from the Far East rather than the established tech players named. I would also expect them to buy if or when the company is on its knees. Ningbo Bird, Haier, Lenovo, BenQ or HTC for example already know how to make phones, if they want cute industrial design they can buy it in as necessary from IDEO, frog design or their ilk. If the company did tout around for a buyer, you could expect the business to drop as carriers and enterprise look for alternative ‘safer’ suppliers. If the business isn’t on its knees when the for sale sign goes up, it may be by the time the deal is signed.

The crown jewels: the PalmOS software is already available to whoever wants to licence it at a discount to Windows Mobile, the value would be in the carrier relationships and the brand recognition of the Palm name.

UPDATE: Palm Addicts ran this piece in full, you can find it here.