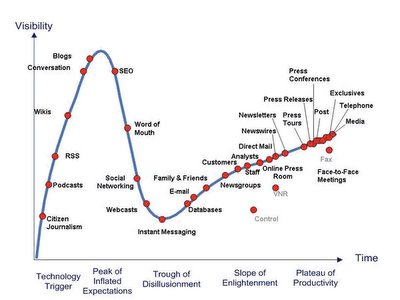 Working practices change but the industry adapts to them.

Foremski starts off by pointing out how search engine marketing has affected media advertising, indeed I went to a meeting the other week where Charles Dunstone talked about how Carphone Warehouse used to be the second largest advertiser on commercial radio stations where they operated and had now transferred the vast majority of that budget into online marketing. Search engine marketing is useful, it is particularly seductive where marketers need to justify their existence on regular basis. It provides lots of PowerPoint-friendly data that can be analysed and discussed at nauseum in overly long meetings.

It is very good at driving transactional traffic.What it won’t do however is brand awareness or preference, indeed Dunstone complained that some of the online affinity marketing partners that Carphone Warehouse used chose terms ‘very close’ to competitors names.

This is hardly the kind of marketing techniques to build continued business through brand loyalty.

While existing high profile companies can benefit from blogs because it allows direct communication with readers without having to go through the media lesser known companies or start-ups need the help of a PR expert.

Foremski cites Robert Scoble providing the example of a start-up company that acquired 400,000 beta users in just one week from a mention on a few key technology orientated blogs.

These are all areas that a PR consultant can provide valuable input on for a start-up company. Blogs are shaping the news, just like the Usenet and forums have done for a considerable amount of time on things like the Pentium floating point mathematical error which gave Intel some major damage to their reputation through to discussions on whether Ashley Cole and DJ Masterstepz were implicated in the the New of the World allegations about football players and how their court actions against the paper were likely to play out.

According to Wikipedia, Public Relations is the art and science of building relationships between an organisation and its key audiences. A relationship consists of a two-way dialogue and blog comments and noise in the blogosphere is another tool that helps PR listen and engage with these key audiences alongside

Blogging is of its time, Scoble has been at the right place at the right time, there are countless other people as enthusiastic about their work as Scoble that do not get read (like most of the folks at Sun Microsystems), it’s the the same as other forms of media.

As the number of blogs on the Internet continues to grow at a furious pace the signal-to-noise ratio will decrease.

In fact there is some indication that blogs are passe. If one looks at Myspace.com, it now has twice as many members as there are blogs online, it already has groups that specialise in discussing employers, products and services. It has put bands like the Arctic Monkeys into the charts.

Blogging still offers the opportunity to improve the page rank of your site, which is why pseudo blogs are being set up by search engine spammers and my blog content frequently ends up being scraped and repurposed by these people. In fact this spamming could see search engines decrease the weighting given to blog links and therefore deminish their power.

Foremski’s opinion on PR seem to be formulated more by some of the symptoms of what he sees as PR like press releases and cringe-worthy parties where media pond-life are invited rather being based on an real understanding of the profession.

Foremski quotes blogging as being a factor of ten less expensive than traditional PR, but as my old man told me a long time ago: if something is too good to be true, it’s because it is.

Blogging is a useful technological tool and PR will adapt to it, though the change will not be as dramatic as everyone thinks it is.

Ok, a case in point; six-to-eight years ago the big thing was online press rooms, now every company has a press pack online, but releases are still emailed out and web-casts are still not as attractive as face-to-face interviews – try offering a CEO video conference interview to a journalist :-).

Whilst journalists like Charles Arthur talk about wanting to migrate to RSS feeds, how would the find out about a product or service of interest from a company whose RSS feeds they hadn’t subscribed to yet?

PR is wider in its remit in promoting the latest Bubble 2.0 widget to nappies and washing powder. Blogs are just another tool and channel in the arsenal of the PR practitioner and I think bloggers have more change coming down the pipe to them than the other way around.

Tom Murphy of Microsoft Ireland has a good article here where he talks about blogging as one part of a multi-channel approach in technology PR campaigns based on the “Gartner hype curve” (I have also seen it as the Judith Hurwitz hype curve after the former US indpendent market analyst house).