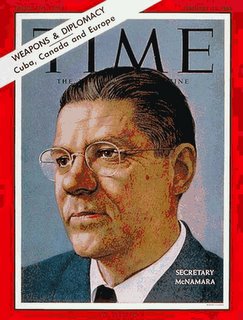 Body uncount – Neal Stephenson and Frederick George’s political satire and thriller Cobweb has the unscrupulous gravy-train merchant Dr Arthur Larsen inventing a notional statistic based on the number of people the work of his researchers had saved for public relations and loosening the purse strings of grant bodies.It reminded me of the kind of statistics that we would use to manufacture news for clients that had nothing new to say.

In one particular case we took the percentage savings figures that the client had achieved for existing client installations over a year. (We didn’t do anything as coarse as asking the client how these numbers were derived).

We then applied this to a government figure on the amount of money being spent by national and local government on IT initiatives using similar technologies.

A press release was issued on the wires, sold into journalists and emailed to the opposition political parties.

Sure enough we were asked to arrange a meeting between our client and the Cabinet Office for further discussions on their offering.

Regarding the picture, Robert McNamara when secretary of the Department of Defence has been accused of using statistics like body count as smoke and mirrors victories during the US involvement in Vietnam.