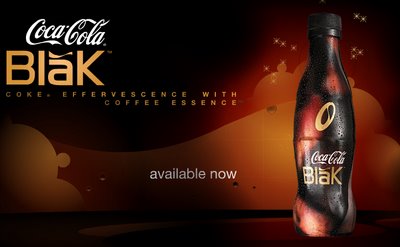 Coca-Cola have launched a new variant of Coke in the States called Coca-Cola Blak. Essentially is some sort of Coke-coffee hybrid. Fast Company blogger Jennifer Reingold thought that it was designed to compete with Starbucks head on, or is it supposed to compete with Jolt cola – a heavily caffienated cola that acts like nitrox for jaded geeks?This would explain why it is in a ‘Coke-shaped’ PET bottle with a wrap that looks like the kind of camoflage pattern that would be worn by Satan’s storm-troopers in the battle between heaven-and-earth.

It has been launched with a pretty standard brochureware site in Flash and the home page has a female voice over that sounds like she should be reading the news on a smooth jazz radio station with second-rate lift music in the background. This vibe is continued in the free wallpaper downloads that feature a bongo player.

The product and the brand messaging feel schizophrenic.

Weird, if Coke wants to sell more drinks, what about selling Barqs in Europe?