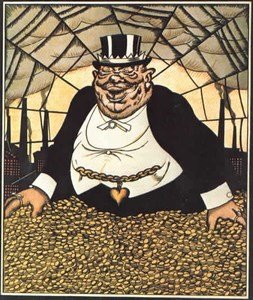 I remember at an agency that I used to work at that we let go just under 20 team members and upgraded the soap and hand cream by putting Moulton Brown products in the bathrooms. It caused internal uproar, being viewed as insensitive by the staff who were left to pick up the pieces.Conversely penny-pinching can have as adverse effect on an employees view of their organisation. Penny-pinching is a tax on the middle-ranking employees, senior executives usually don’t have the same rules applied to them in a validation of Leona Helmsley‘s maxim that ‘only little people pay taxes’.

Slate columnist Daniel Gross received a deluge of responses from readers when he asked about incidents of petty pinching. Between secondary research and the readers responses banks Bear Stearns, Credit Suisse and Bank of America came off as being particularly unpleasant and petty employers.

However, whilst these companies may be proud of their stingyness, it may impact them in their future recruiting requirements thanks to word-of-mouth, internet forums, industry gossip blogs, job sites and the media.

When such a decision is combined with bad news that the company is trying to manage however it can add petrol on the fire. A classic example of that is my former employer Yahoo!. The company is in a continual talent war for the best technical and commercial staff with rivals (notably Yahoo!) and the good work being done by Hack Day for geek hearts-and-minds risked being undone with this memo.

Internally the memo went down like wet concrete, especially as there was widespread talk about a 1BN USD splurge on Facebook – that may or may not happen.

The memo taken with the recent downturn on internet advertising pronouncement was seen to show the company in an even worse economic light to analysts and business folk because it smelt like economic trouble. Yahoo! was scrimping on its pennies because the numbers were apparently very, very tight. The truth is that the numbers are likely to be on the low end of the expected range, but we don’t live with truths but perceptions.

People tend to forget internal communications is not just about internal emails going out allegedly written by senior management or the unread newsletter pinned to a notice board, but about every touch point that an employee has with a company.

The barriers between inside the company and outside no longer exist either.

With HR professionals in large companies increasingly wrapped up in red tape and compliance work for hirings and firings, there is a case to be made that these kind of operational decisions are too important to be left to personnel departments or middle managers.