As the MWC 2015 hype around consumer product launches died down, we’ve seen a decline in overall online chatter around MWC with a drop from about 180,000 mentions on the Monday to approximately 110,000 mentions on Tuesday. As I write this post, there is not one single MWC-related story on the Techmeme news aggregator which acts as a kind of de-facto geek zeitgeist.

Netizens would appear to have a ‘magpie’ mentality, being attracted to shiny trinkets.  The closest we saw to glitz was prototype technologies such as the Fujitsu smartphone which had a built retina scanning function to out-tech Apple’s finger print scanner. Fujitsu has a history of biometric innovation having brought to market an ATM machine which read the vein patterns in your palm a few years ago. Whilst interesting, these technology showcases have more than a hint of therapyware about them as companies prototype in public to try and understand what is likely to be a viable future offering.

The decline online discussion belied the variety of topics that were being announced at the show. 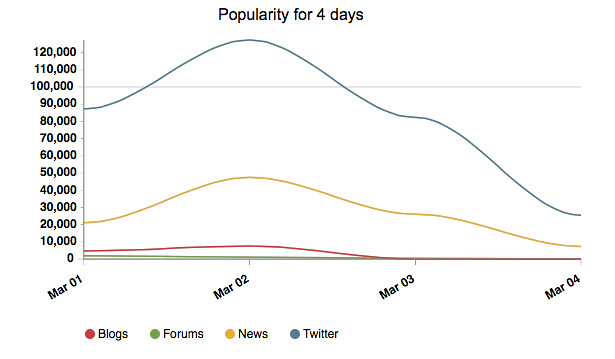 We saw a surge in interest in the ‘Internet of Things’; not only in terms of product offerings but discussing the issues that IoT is likely to usher including security and a forthcoming bottleneck in cellular backhaul capacity as demand increases.

Fifth generation (5G) mobile services are likely to be an enabler for the ‘Internet of Things’, and carriers have managed to pull together to define what they want from 5G. The challenge the industry faces is scaling the technical hurdles to deliver 5G infrastructure technology, in the five years or so that the industry has envisioned it will happen in.

Companies are already focused on putting the business model for 5G in place whilst 4G services are still evolving. One example was Japanese electronics firm Panasonic who announced an LTE-based MVNO (mobile virtual network operator) that would be aimed at connecting machine-to-machine communications.