The estimated reading time for this post is 148 seconds

The silent majority as a concept was introduced to the world by Richard Nixon in a speech about America’s position in Vietnam on November 3, 1969.

The portion of the speech that featured it is below:

Let historians not record that when America was the most powerful nation in the world we passed on the other side of the road and allowed the last hopes for peace and freedom of millions of people to be suffocated by the forces of totalitarianism.

And so tonight-to you, the great silent majority of my fellow Americans-I ask for your support.

I pledged in my campaign for the Presidency to end the war in a way that we could win the peace. I have initiated a plan of action which will enable me to keep that pledge.

Nixon’s ‘silent majority’ reference tapped into a tenet of common wisdom, that the majority of the population is generally passive in actions and discussions; a positive spin on Juvenal’s concept of bread and circuses or panem et circenses. He used the phrase to decry the selfishness of ordinary Roman citizens, their neglect of wider concerns and likely lack of civic duty.

There is a similarly silent majority today online, in spite of the democratisation of publication via social channels. A small proportion of us publish. I got the model below from Bradley Horowitz at Yahoo! but I am sure it came from someone earlier and it still holds true today 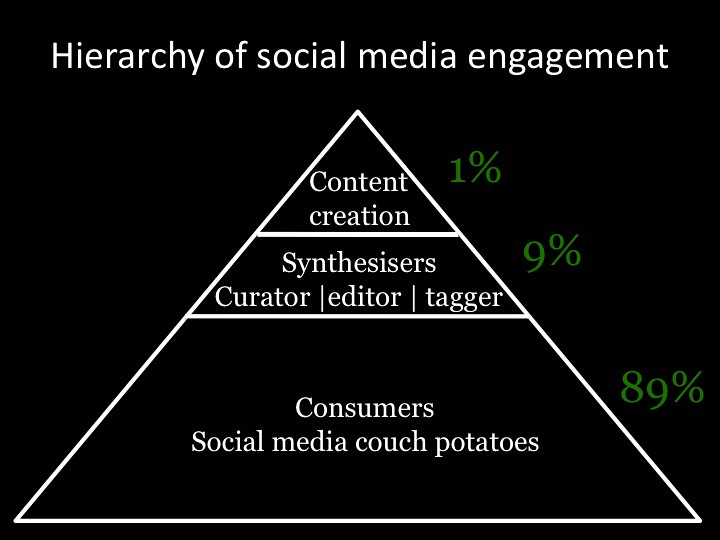 What this means is essentially two things:

Social conversation is often the province of the highly connected, the verbose and of polarised opinions (complaining about a product that really got under their skin with poor performance or fanboydom).

Ironically search data probably tells us more about the population in general, the problem that search presents marketers with is quality of data. The major search engines (Google, Bing/Yahoo!, Yandex) no longer provide web sites with the details of the search term used to arrive on a given site as they have defaulted to HTTPS.

Google Trends has decided to give ‘real-time’ data rather than the few days delay it previously provided on search terms. Google Trends doesn’t provide search volumes, but search ‘rate of change’ which means that static low or high search volumes won’t register. But its the closest we have online into easily understanding the nature of the silent majority of social; what they are interested in and care about.