The estimated reading time for this post is 413 seconds

We think of consumption as part of the very stuff of modern life. I clear out items on eBay. My Mum and Dad have boxes of things unopened since they moved house in 1981. A lady who lived up the road who died last year had people working for five days to clear out the things she had hoarded. The house had been packed with items from ceiling to roof.

The role that consumption plays varies but taps into deep emotional ties. I felt both an emotional journey that I can only equate to grief and a certain release on getting rid of my record collection. I moved country for work and the bulk of it had to go. What was more distressing was not being able to make sure that it went to a good home at the time. It had defined me, brought me joy and latterly had been a weight that I only felt by its subsequent absence.

Consumption and identity are also intertwined.

In my pre-internet days you could get a sense of someone by visiting their sitting room or their bedroom.

You were able to build up a picture in your head about the person, their tastes and some historic touch points.

Much of this now remains out of sight in the sitting room with the rise of cloud based services. But the picture is still here, though you will need a screen to see it.

For many people homes are a mix of the digital and the analogue. Some young people may adopt analogue items for ‘authenticity’ in their lives. For older people its the archeology of their lives. Photos not converted to digital scans. Music that had meaning or was at a certain stage in their life. Souvenirs from holidays.

If I look at my own parents:

With time, more hasn’t mean’t better ‘quality’ consumption. Technology has provided us with more reliable electronics. Unless you are a hi-fi buff you are unlikely to know about the fragility of valve electronics or the weight of discrete solid state circuits.

Globalisation has brought consumption of more ‘just good enough’ products. My parents still have some of the furniture that they bought when they got married. It isn’t Vitra or great Danish design, its mass producted items of its time. But the quality of the construction and materials contrasts with flat pack furniture bought later.

Less consumption seems to have had a number of sides to it:

You had the vintage well tailored tweed jacket or furniture that had been in the house for generations. In years to come what will all the delapidated Billy bookshelves and tchotchke fridge magnets say about us? Maybe this is a good part of the authenticity at the centre of Peter York’s ‘Hipster Handbook‘?

I started to think about these things following a death in the family. My uncle lived in the ancestral home; which is a small farm in the west of Ireland. I had spent a good deal of my childhood there with him and other relatives. Life had got in the way of going back in person and there had been bigger gaps in time to my visits than I thought.

Going back to the farm brought thoughts about consumption into sharp focus for me. My Uncle’s approach to consumption was very different to mine and likely yours as a reader. 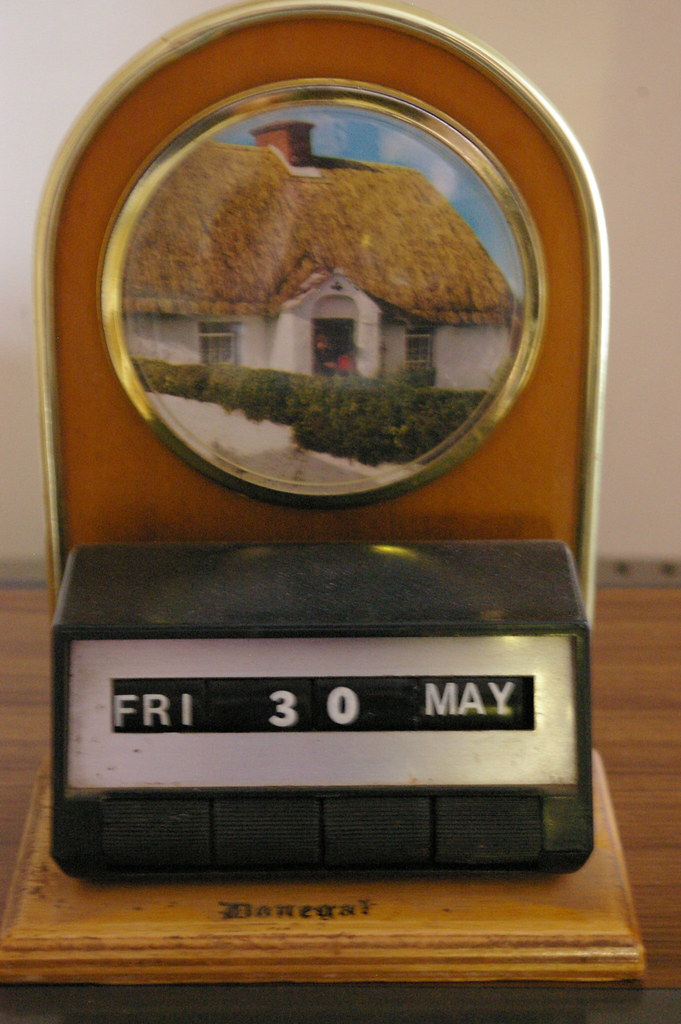 His house remained unchanged from when my Grandmother had lived there. There wasn’t his ‘footprint’ in the house at all. From a personal point of view it meant that I could understand my Uncle in terms of ‘what’ he did; but not the ‘inner life’ that we are used to understanding through ‘reading the tea leaves’ of consumption: books, music etc. At the time I came away perplexed, a mystery that I would never understand.

He lived in many respects a pre-industrial agrian approach to life. Time moves at the pace of the farm work rather than the clock. Your mark on the world was in the continued existence of the homestead.

This brought into sharp focus for me the newness and ‘abnormality’ of modern consumerism. Perhaps ownership of the land provided the ‘weight’ that mass consumerism provides for many of the rest of us? And what would it mean if you had felt that ‘weight’ all of your life as my Uncle would have as the oldest son in the family?

In contrast, my Grandmother had been more modern in her attitude to consumerism. She loved the television. She got rid of old wooden chairs that would need the occasional coat of paint for black powder coated steel and vinyl cushion seats.

Into her late 80s she loved DVDs of traditional Irish music performances. A tape of electronica and early rap that I made at the age of 15 so she could understand what I was into at the time was a step too far for her.