Over the past few years things have been set in motion that are changes that are driving  social platform moves and users:

Younger and not so young people are seeing the benefit of instant messaging that is designed around mobile devices in a wider social platform moves. OTT messaging services like Kakao Talk and WeChat allow for group discussions allowing ad-hocratric decisions like what film to watch at the cinema to be made on the fly.

Probably just as important was that the lack of a legacy base in the applications allowed them to be designed mobile first, providing a focused elegant user experience. 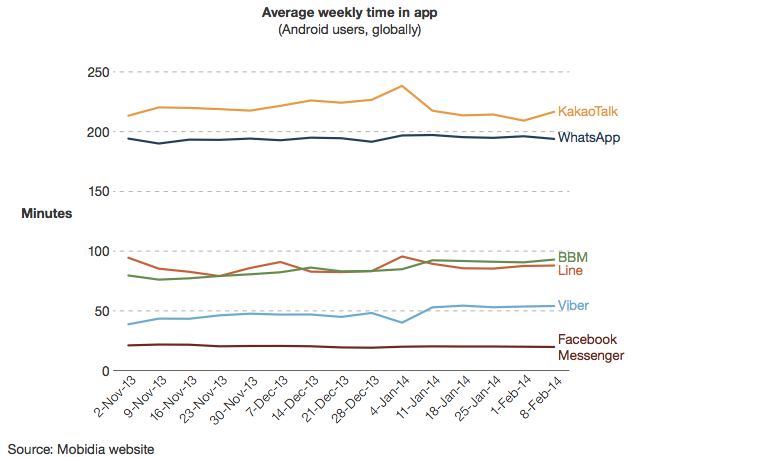 All of this provided a compelling use case, which also meant increased engagement at the experiences of desktop-orientated social networks.

In Korea, Facebook has made slow steady progress, helped mostly by a security breach at local network Cyworld. In comparison, KakaoTalk came from nowhere to 90% penetration of the Korean market. This change has also happened in China, it is hard to understand how fast traditional networks like Sina Weibo and Kaixin001 have been left behind by Weixin (WeChat).

“This is a new phase for social media in China,” said Hu Yong, a journalism professor at Peking University. “It is the decline of the first large-scale forum for information in China and the rise of something more narrowly focused.”

In reality Sina Weibo hasn’t been social media in the way we understand it in the west. Most of the accounts tend towards passive consumption, Weibo acts like a stream of news. This makes it hard to estimate how many accounts were ‘real’ and how engaged the audience was. Anecdotal evidence suggested that riends still used Sina Weibo to get celebrity gossip and news but moved to private channels for interaction.  The New York Times considered this shift in China to be one of an issue to do with freedom of speech rather than a broader social movement towards conversations closer to the ’email’ age.