The estimated reading time for this post is 656 seconds

I was talking to friends about Apple’s letter to investors on January 2. This was almost a month after Jaguar Land Rover had disclosed sales problems in China. The key question that came out was how much were Apple milking the Chinese situation? Was the bulk of their problems really down do China? Or was there a set of wider issues?

The balance maybe wrong, but there are challenges for Apple (and other western investors) in China. In the second part of the post I’ll point out the problems with Apple’s and Jaguar Land Rover’s story.

Where China is coming from

Before we talk about the current state of China lets look at where it has come from. Prior to the founding of the People’s Republic of China, the country had been through a lot:

From Hong Kong’s Statue Square, the Bund in Shanghai and Tsingtao’s famous beer, one can still see the hand of western powers. Whilst the details of the British Empire’s workings have slipped from British memory, it is still keen in the collective consciousness of the Chinese Communist Party.

The Fairbairn-Sykes dagger on the badge of the SAS special forces unit is a case in point. William Fairbairn and Eric Sykes served during the inter-war period as Shanghai Municipal Police. 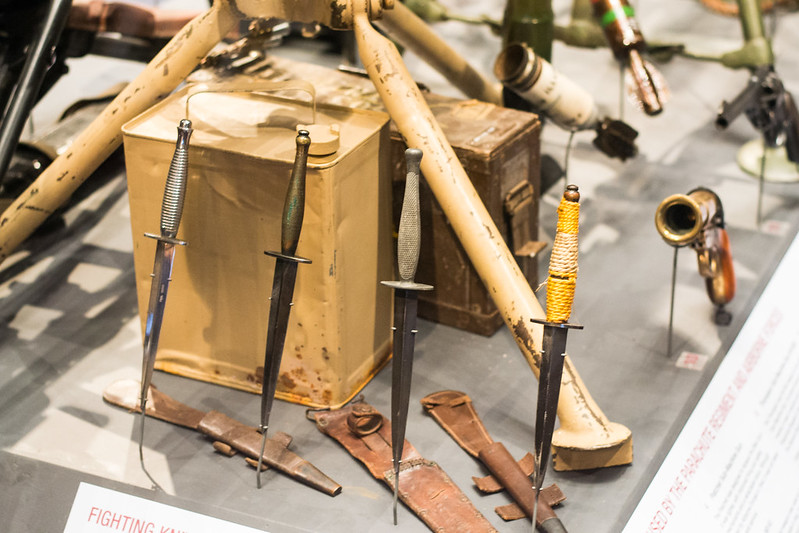 A good deal of the work involved a lot of hand-to-hand fighting and shooting. They developed a particularly ungentlemanly form of fighting called Defendu that they taught to British spies and special forces. Sykes and Fairbairn designed the dagger based on their hand-to-hand fighting experiences in Shanghai. That probably tells you a lot about what colonial rule looked like in China.

Nothing illustrated the way China had fallen than the way the country was treated in the immediate aftermath of negotiations around World War One. Whilst European Empires might have fought the war, they depended on Chinese sailors in their merchant navy, dug trenches, maintained tanks, logistics and carried water in the deserts of Iraq.

Germany’s concession on China’s Shandong peninsula was handed over to Japan, rather than returned to China. China eventually got its land back in 1922, but Japan held control of strategic assets including the railways. Japan then pressed its claims again with the second Sino-Japanese war in 1937.

Whilst Shanghai in particular was a thoroughly modern city with:

But it was literally a different world from the rural areas.

Joe Studwell in his two books How Asia Works and Asian Godfathers paints a good picture of the continent. In the immediate aftermath of World War Two, Asia rather than resource-rich Africa was the poorest area of the earth. And there were few poorer than peasants in the most barren Chinese provinces.

Mau’s Communist party coming to power reduced if not, stopped many things that ailed the rural majority of the population. It got rid of landlords through class-based killings, entrepreneurs under the Three-anti and Five-anti campaigns. Opposition from remnants of China’s former ruling party was suppressed. The Communist Party tried to provide basic rule of law and healthcare for the peasants. Bare foot doctors brought them very basic health care. This all came at a cost, economic growth was slow, the middle class elites fled and people were universally poor.

Mau attempted to rectify this employing Soviet-style agricultural collectivism and industrialisation called The Great Leap Forward. This wasn’t successful in raising production and building the country’s industrial capability and a famine ensued.

Mau then spent the next 20 years battling opponents within the Party through the Anti-Rightist campaigns and the Cultural Revolution. Whilst Mau managed to maintain power, many of the party cadres were punished in order to keep him there. Xi Zhongxun (father of Premier Xi) was purged and imprisoned a number of times. Mau died and a more pragmatic leadership stepped forward with Reform and Opening Up.

Reform and Opening Up

The move towards Reform and Opening Up under Deng Xiaoping was the start of modern China as we know it. The country went from a standing start to today’s economic power house. From 1976 to 1989, the country went through a painful process of restructuring building a dual track approach to communism:

The change gave rise to corruption, inflation and worker support for the Tiananmen Square protests of 1989. The protests posed an existential challenge to the party. Its suppression and subsequent ‘conservative’ party backlash put a clear line in the sand in terms of how far China would go. Deng was again able to push forward reforms in 1992 and the private sector share of GDP took off.

The Chinese Communist Party’s legitimacy benefited from the hundreds of million people that Deng-era reforms lifted out of extreme poverty.

Under the shadow hand of Jiang Zemin, the party became more conservative. Hu Jintao started to reel in a little of the laissez faire capitalism from 2005 onwards. Some of what Xi Jinping’s administration has done is keep on with that process. Unlike his father, Xi opposes many of the reforms put through by Deng. Presumably this is down to his opposition to shows of excessive wealth and attendant societal ills:

The 2008 financial crisis adversely affected the credibility of western capitalism in the eyes of China (and its role in the hybrid model of Chinese economic reform).

Xi also differs from Deng in terms of his world view. Deng and his successors up to Premier Xi took a pragmatic don’t make waves attitude to foreign policy. There were bigger issues to deal with at a domestic level.

Things started to change with the US bombing of the Chinese embassy in Belgrade in 1999. One can trace a rise in Chinese nationalism from this point. Nationalism is one of the few political outlets acceptable within China. The government puts in controls only when it feels that the sentiment is excessive, otherwise it is a good escape valve. Nationalism has taken on an ethno-centric focus being equated with the Han race. The Han make up about 93% of Chinese people, but are one of 56 recognised ethic groups in the country.

The road to great rejuvenation

China saw the return of its last colonial occupied territory in 1999. The country grew and reflected their new-found status in the Beijing Olympics and Shanghai World Expo. Premier Xi saw this as a natural progression of The Chinese Dream – the great rejuvenation (or revitalisation depending how you read it) of the nation.

Urbanisation is seen to have a positive impact on economic growth and social conditions according to this virtual ‘fly-wheel’ model by AT Kearney. But it depends what parts of the economy the city supports. 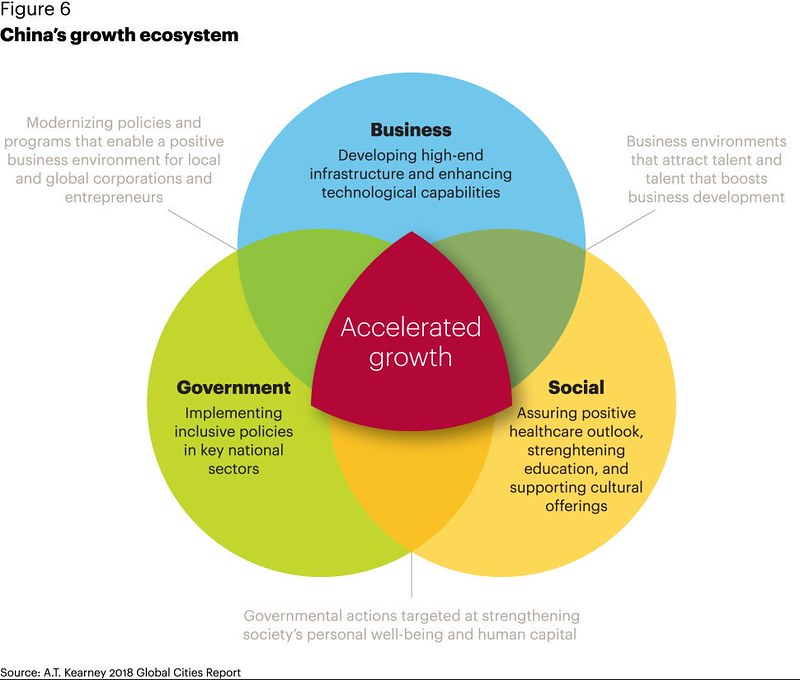 China managed to sustain itself during the 2008 crisis by focusing on increasing infrastructure spending projects such as its high-speed rail system. The country’s spending on infrastructure has meant that property development and state owned companies are highly leveraged. It also meant that private sector companies had to get creative in getting commercial loans and a shadow banking system outside government control existed.

In order to put in place his plan for national rejuvenation Xi has had to rein in economic growth from 13% per year to 6 – 6.5% predicted this year. This has also meant closing down industrial over-capacity in industry, so rust belt provinces like Hubei have fallen into full blown economic recession as older steel plants have closed down.

China has looked to build a domestic led consumption economy to limit its exposure to troubles in export markets. This consumption hasn’t increased as much as hoped for a number of reasons:

China’s Belt and Road initiative has been championed by Mr Xi has a number of functions:

Reconsidering the Campaign to Suppress Counterrevolutionaries | The China Quarterly

China plans to set a lower GDP growth target of up to 6.5% | Gulf Times – most accessible publication of the Reuters report that I could find

Belt and Road Is More Chaos Than Conspiracy | Bloomberg