Probably the biggest thing that happened was me rediscovering Quora the question-and-answer network. I replied to a question ‘What are the major reasons behind Yahoo’s drastic downfall?‘ and then republished it as a blog post with a few more bits and bobs. Traffic blew up on the post when Dave Farber published a link to it in his Interesting People email list. I read Yahoo’s $8 Billion Black Hole – Bloomberg Businessweek on Thursday and it felt like part two of my piece on Yahoo! which looks to now and forward whereas I looked at macro factors and heritage. Rediscovering Quora also reminded me of the lost opportunity in Yahoo! Answers.


I got to see Keith Weed present an aggregate view of social as it pertains to Unilever’s brands and whilst on stage he revealed that they had an inter-agency war room set up to steer the media spend around Knorr’s #LoveAtFirstTaste campaign.

Short of Tinder integration I don’t really know what else they could have done. I do wish that it wouldn’t keep recommending chicken dishes to me though. Check out the campaign site here and the ad below.

Pepsi went big with a digital OOH augmented reality campaign in Singapore. Most AR projects tend to be smaller rather than going for giant screens. Pepsi has an under-appreciated heritage in pioneering media devices. It did QRcodes on cans in western markets, so far ahead of consumer adoption that they had to provide instructions on the cans explaining what a QRcode was. This was on Pepsi Max which is right in that young adult / youth marketing space.

Hasbro who own the Monopoly board game, posted this surreal live stream on their Facebook page. It is strangely compelling like some bizarre form of performance art.

China’s Coming War With Asia: where do I start with a book title this inflammatory? I went to the trouble of reading the book twice before starting this review. In the end, the only conclusion I can come to is ‘Policy Faultlines in East Asia’ doesn’t have the same ring to it. 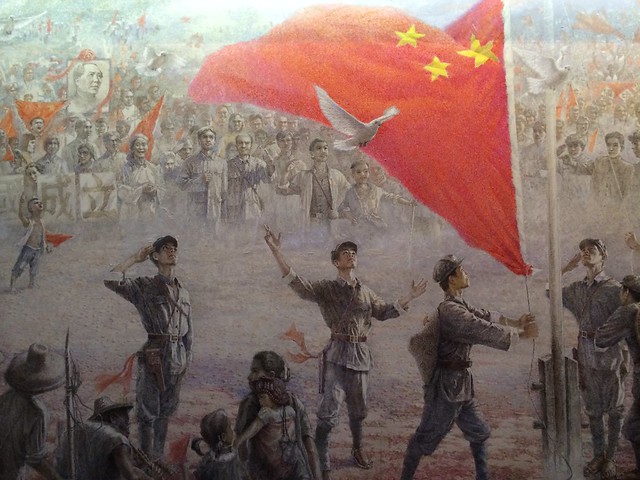 Holsag marshals a huge range of facts and opinions within the book. If you want to have a basic understanding of modern Chinese state, the book is a good primer.

He provides insight into the Chinese Communist’s Party’s policy cornerstone of territory maximisation. They were happy to put off their agenda for tactical advantage, but never gave up on their goals. China’s neighbours have similar inflexible policy goals. There is is no win-win solution.

Holsag doesn’t attempt to provide a solution for de-escalation of these edges. His book only provides a macro-level understanding of the countries involved. For the reader who wants to understand Asia, Holsag’s book is an excellent primer.  More on China’s Coming War With Asia by Jonathan Holsag.

Edelman’s Trust Barometer has become a kind of zeitgeist meter for the kind of people who go to the World Economic Forum at Davos.

This year Edelman talks about the Grand Illusion, that everyday people will follow the global elites. Income inequality and a growing realisation that the future won’t get better has gradually changed perceptions. It is yet another data point that signals the death of the American Dream and according to Citi the end of Pax Americana.

It is also worthwhile looking at BAV Consulting research on ‘the best countries in the world’ to see how country brand equity are now perceived.