The estimated reading time for this post is 189 seconds

There was two announcements of services that had passed the billion strong user mark.  There was a comparison between Gmail’s slow and steady approach versus Whatsapp’s swift rise. 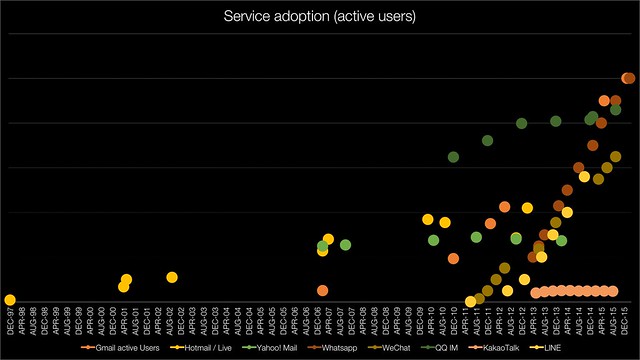 Gmail was born as a desktop service first. It started just as web 2.0 was starting to take off. The service was invitation only for almost three years, before becoming generally available.  At the time its 1GB of storage for free was revolutionary. A year later they increased the storage to 2GB. By comparison I was paying £60 a year for an IMAP mail account that was separate to my ISP. Hotmail would give you just 4MB of storage in your email.

Gmail set the standard for our expectations of email. Now email accounts will accept 25MB attachments – a standard set by Gmail. My corporate email account has a 1GB capacity copying Gmail at launch.

Yahoo! had to compete and responded with ‘unlimited storage’ after Gmail became generally available. By this time Gmail storage had grown to 2.8GB and Live.com gave 2GB. In the space of under three years Gmail had grown to 51 million users.

This was still an era when smartphones weren’t ubiquitous in the same way that they are now. I was fortunate to have mobile email access on my Nokia and Palm smartphones around this time. BlackBerry devices were a business tool, as was Windows Mobile. Data was more expensive and slower than it is now. Although Yahoo! Messenger was available on my phone it was slow. Skype worked best as an indicator of presence on mobile devices.

Smartphone ubiquity through Android and iOS was an enabler for email adoption. But Gmail didn’t receive the same boost from it that Whatsapp did.

If you didn’t have a Gmail account you could still send and receive emails to Gmail account holders. Early adopters of smartphones are likely to have already had an email account. So they would increase user engagement through accessiblity. But they would not drive a similar growth in new accounts.

Whatsapp benefited from being a closed service – you can’t message a WeChat account. Also it rode smartphones as an accelerator, it didn’t have a legacy desktop user base.

Another factor is that its competitors managed to monetise their services earlier. This was at the expense of international adoption. An extreme example of this is Korea’s KakaoTalk.

KakaoTalk has built an absolute ubiquity in South Korea. It has continued to growth beyond 90 per cent of Korean mobile users. Profitability has increased, new services launched; whilst global user numbers declined.

WhatsApp has grown fastest towards its billion strong user base in markets that are hard to monetise. It is big in Latin America, Africa and South Asia. It is only starting to build in features for brands.

Not all users are equal, many present little business opportunity for internet companies. I remember when Yahoo! was rolling out the ‘unlimited’ storage email account; it was actively discussed only providing the feature in developed market accounts rather than all users. The billion strong user base is an interesting measure, but requires further interrogation. More WhatsApp related content here.