A focus on the design tweaks in the new Casio GWF-D1000 Frogman watch in comparison to previous Frogman models and some gripes that become obvious once you live with the watch for a bit. Looking to buy a GWF-D1000? Have a read of this first.

The estimated reading time for this post is 476 seconds

UPDATE – Casio G-Shock GWF-D1000 sudden stopped working and took on water  when I washed some curtains in a basin. Which is a bit much for such an expensive model that is well-known for its reputed toughness and 200M water resistance. Certainly not what you expect from a watch brand known for its toughness and having a current street price of £800. You can see the water inside the glass on the watch face and no apparent point of ingress. It’s not that long out of warranty as well. Casio have replaced it as it was just within warranty; but think carefully before purchasing one. 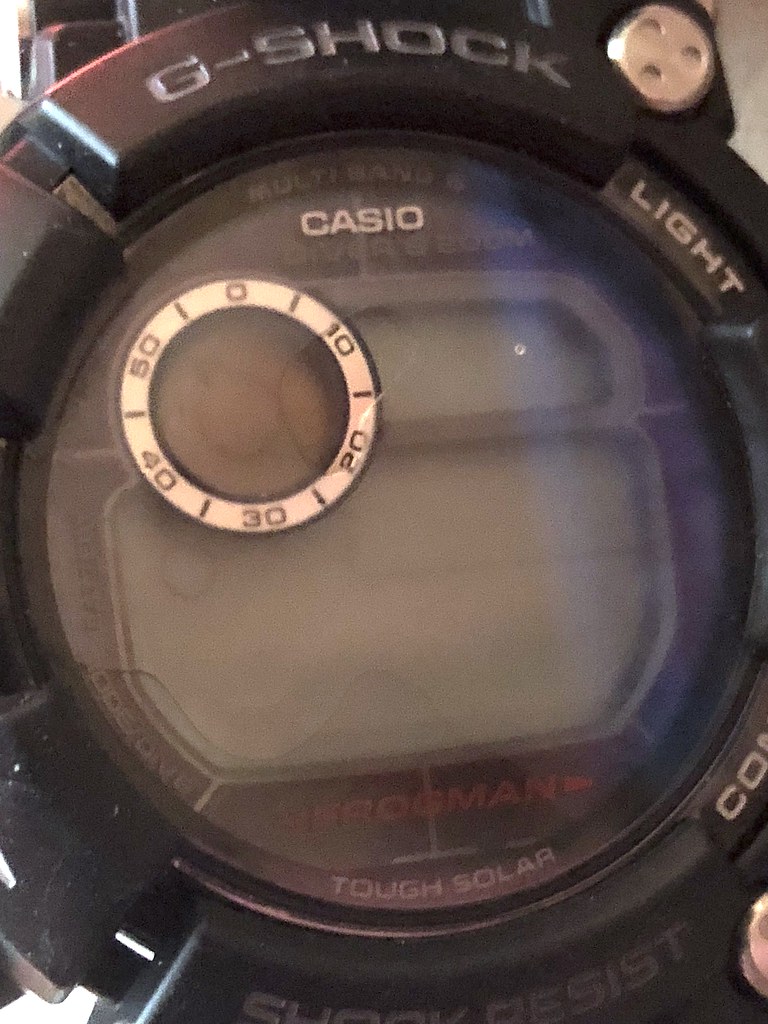 When you typically look at reviews of products, there are usually reviewed over a short time when they are new-and-shiny. Often a products features and character come out over time – a symbiotic process between product and user.

The Casio G-Shock GWF-D1000 is the latest in an a series of G-Shock watches aimed at scuba divers. The first Frogman came out in 1993. The overall design has largely been the same with an asymmetric case and a large display to make operation easier. The positioning of the watches and price points changed over time – some of the previous models had titanium cases and came under the Mr-G sub-brand. The last few models have a stainless steel core case with a DLC (diamond like coating) to protect the surface.

Over time it has picked up features as the technology improved. It became illuminated by a small green bulb, then electro-luminescent material. It moved from relying purely on battery power to having solar cells and a rechargeable battery. The watch became more accurate by picking up time signals via radio from six locations around the world that are calibrated with an atomic clock (precursors to the NTP services around the world that keep your computer and smartphone bang on time.)

The key technology gains over the 1000 include:

The real benefits for me were in the build quality:

It makes sense to tell a little bit around why I wear a Frogman. I want an accurate watch (who doesn’t?). I want a reliable watch (again, probably a hygiene factor for most people; but one that hints at why the G-Shock has replaced Rolex as the default watch I have seen on Hong Kongers over the past 10 years or so. G-Shock offers robustness that 20 years ago would have come from fine Swiss engineering – at a much lower price point.

I love my Swiss dive watches but there is a time and place for everything.  The knockabout case and its water resistance means that you can forget about the watch. You don’t have to coddle it or worry that it will pick up undue attention. You don’t have to worry if you get a bang on an elevator (lift) door, dropped on the bathroom floor or going for a swim.

The G-Shock is an everyman watch – unless its got a lurid colour scheme it isn’t likely to attract the attention of your average petty criminal. I’ve often taken it off in the office so that I can type in greater comfort and left it there by accident when going home. I’ve never had a G-Shock go missing.

It is relatively easy to use, despite the modal nature of its interface design. To change settings, use functions or see recorded information you have to cycle through a series of text menus – it has more in common with a 1980s vintage video cassette recorder or a DEC VAX. Quite how this goes down with consumers more used to iPads and SnapChat is interesting. Casio seems to do alright by attracting them with bright plastic cases reminiscent of Lego -based colour schemes.

I haven’t dived seriously in a long time, I took up scuba diving while working in the oil industry and have never got back into it since moving to London.  PADI diving at resorts is tame compared to British diving club scene I had been used to.

My work environment is creative which means that my uniform of t-shirts, flannel shirts,  jeans and suede hiking boots make the G-Shock an ideal accessory. I work in the London office of an American digital marketing agency, owned by a French multinational and my clients are scattered in the different offices around the world of pharmaceutical companies. The functions I tend to use most are the world time, date/time and the night light. My iPhone is now my alarm clock.

The reality is that most of these watches will end up on the wrists of people like me rather than people who dive for a living.

The Casio G-Shock GWF-D1000 is only incrementally heavier than the 1000, it felt a bit strange to wear for about 30 minutes after swapping over to the newer model. But in some ways the Casio G-ShockGWF-D1000 doesn’t yet feel like its my watch.

The 1000 strap became shiny in places over time and more pliable, it felt like it became adjusted to me. Give the Casio G-Shock GWF-D1000 a rub over and it still looks box fresh. The downside is that the strap feels stiff and I still feel its edges on occasion – this isn’t about discomfort, but about the watch not feeling like part of you. There are no shiny parts of wear – it feels less like a ‘personal item”. It lacks what a designer friend calls authenticity; unlike distressed jeans, customised flight jackets or combat Zippos. 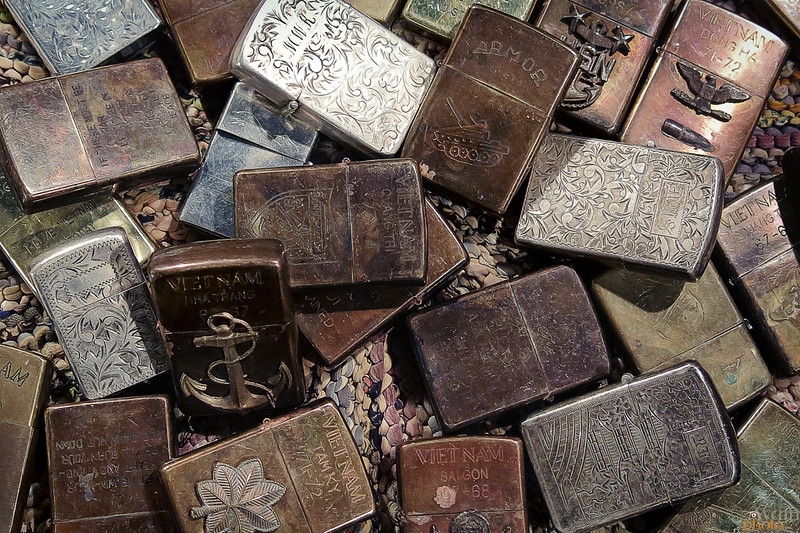 This sounds great for the resale value, but I feel that it provides a worse experience for the wearer of the watch.

The reinforced strap does have one bonus, it holds securely to the case. Look at these pictures of my two year old 1000 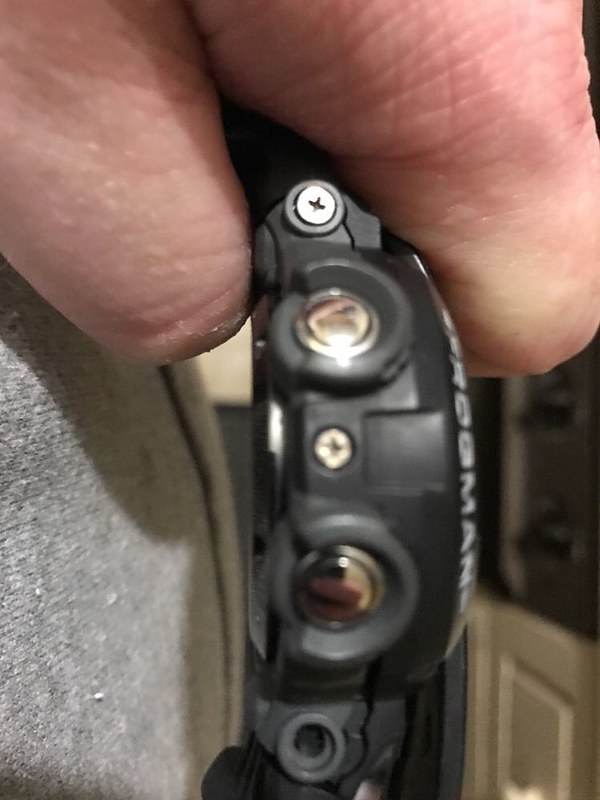 You can see how the retaining screw that held the strap to the case came undone and disappeared over time. You don’t have these kind of problems with the Casio G-Shock GWF-D1000.

The screen on the Casio G-Shock GWF-D1000 uses its real estate in a different way to the 1000. 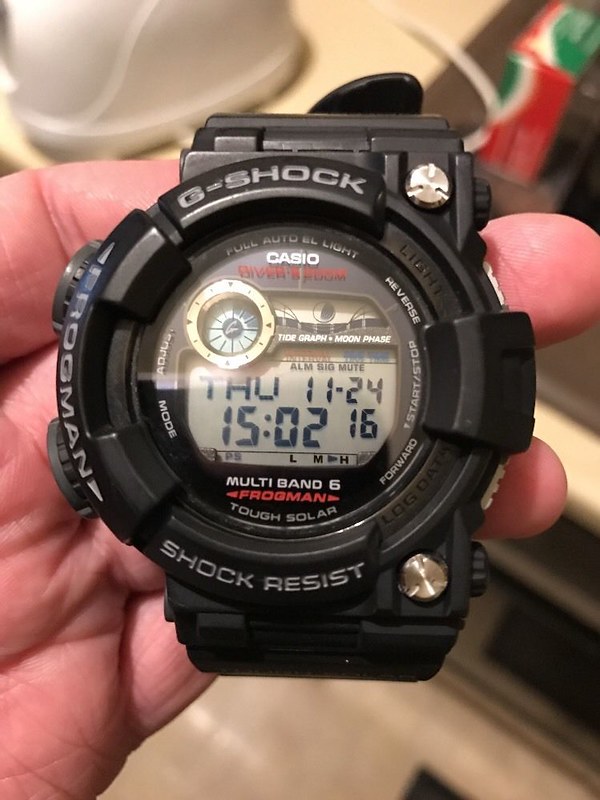 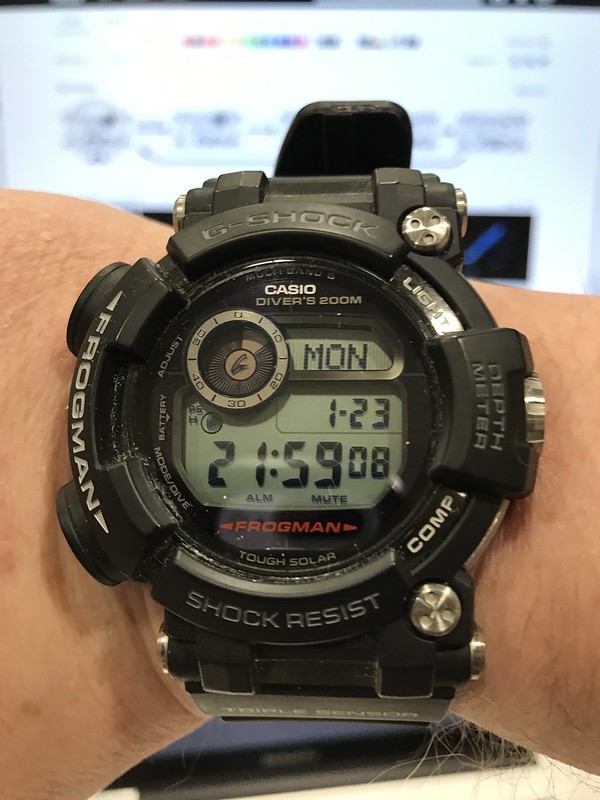 At first the differences aren’t obvious. If you look at the top right side of the screen, the tide and moon segments are replaced by a multi-use screen on the Casio G-Shock GWF-D1000. The small icons for alarms and hourly alerts are moved to the bottom and left of the screen on the Casio G-Shock GWF-D1000, the moon icon now moves to the left of the main screen down from the top right. This probably marginally increases the screen real estate and helps make legibility a bit clearer at night. 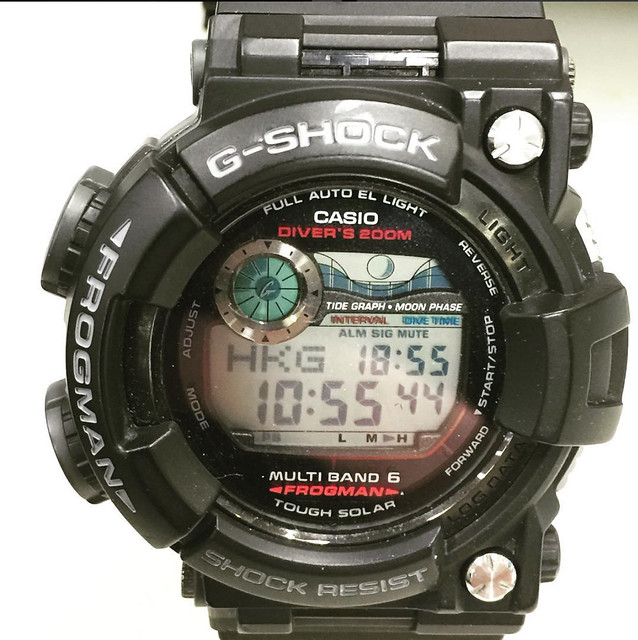 The biggest 1000 feature that I miss is the ability to toggle with one press of the top left button from showing the date on the screen to showing a second time zone; it was extremely handy for work. And having come from the 1000 to the Casio GWF-D1000 it was a real ‘what the fuck’ moment.

By comparison I have to press six times to get to the world time screen. Instead, it now toggles between a tide table and the day. Even giving it a two press option would be a better fix than what the Casio GWF-D1000 currently has. It’s a small gripe, but it annoyed the heck out of me.

My work around has been to keep the watch in world time mode and if I need to know the day or date, I find myself reaching for my iPhone.

If you are really that worried about tide tables, you will be likely using a specialist service as they vary a good deal over relatively short distances.

If the Casio G-Shock GWF-D1000 still sounds like the kind of watch you want, you can get it here.