The estimated reading time for this post is 586 seconds

The recent collaboration between New York’s Supreme and Louis Vuitton seems like a natural fit.  The reality is that luxury and streetwear have been dancing around each other for a good while.

Snide started it all

Snide was slang in the 1980s for fake or counterfeit. Hip Hop and the Caribbean-influenced Buffalo movement in the UK each used counterfeit and real luxury in their own way.

Daniel Day, better known as Dapper Dan was a was a Harlem-based craftsman and business man who dressed a lot of New York based artists from the golden age of hip hop. Dan’s first hip hop client was LL Cool J back in 1985. Dan’s style was luxe, the finest silks and furs were standard issue – think Puff Daddy before Puff Daddy. They went for customised outfits with their branding on which Dan provided. As the scene took off Dan incorporated suit lining material (which replicated the likes of the Fendi, Bally  or MCM brands) and Gucci or Louis Vuitton branded vinyl to make one-off products.

He customised trainers, clothing and even car interiors. Dan’s own Jeep Wrangler had an interior retrimmed in MCM branded vinyl.

Much of the luxury branding Dan used was coming in from Korean factories which at that time supplied the fake trade. Now similar products would have come out of China. I took a trip to the South China City complex in 2010 where fabric suppliers would offer Louis Vuitton labels and Supreme tags side-by-side.  I can only imagine that the Korean suppliers of the 1980s  had similar markets in textile industry centres like Deagu. Outside of hip hop, Dan was the go-to tailor for all the hustlers in Harlem – so you can see how he could have got the hook-up into the counterfeit suppliers.

At the time hip hop culture was not in a relationship with brands who where concerned about how it might affect them. LL Cool J was the first artist to get a deal with Le Coq Sportif. Run DMC got a long term deal with Adidas after their single ‘My Adidas’ became successful. But these were the exceptions to the rule.  So with Dan’s help they co-opted the brands to try and demonstrate success.

Over in the UK, the Buffalo collective of stylists, artists and photographers including Ray Petri, Jamie Morgan, Barry Kamen (who modelled for Petri), Mark Lebon and Cameron McVey. Buffalo was known as an attitude, which threw contrasting styles together and filtered into fashion shoots and influenced the collections of major designers including Yohji Yamamoto, Jean Paul Gaultier and Comme des Garçons. Even if you didn’t know what Buffalo was, you would have recognised the aesthetic from the likes of i-D, Blitz, New Musical Express and Arena.

Buffalo mixed Armani jackets with Doctor Martens work boots, or a Puma bobble hat. Petri used music to sound track his process and this was pretty similar to the kind of stuff that influenced street wear pioneer Shawn Stussy over in California. Motown and hip-hop to dub reggae was the sound which explains the Feeling Irie t-shirts created by the white surfboard maker.

If you thought Bros looked cool in their MA-1 bomber jackets and stone washed Levi’s 501 jeans – there was a direct stylistic line back to Buffalo – rehabilitating the items from their link to skinhead culture.

Buffalo permeated into the street style of the decade; influencing the likes of Soul II Soul. Meanwhile over in Bristol The Wild Bunch were yet to morph into Massive Attack. Two members headed to London; producer Nelle Hooper and Miles Johnson (aka DJ Milo who went on to work in New York and Japan). A shoot was organised by i-D magazine and they turned up wearing their street clothes alongside DJ Dave Dorrell and model / stylist Barnsley. At the time, it was considered to be ‘very Buffalo’ in feel, but Dave Dorrell admitted in an interview that they had just came as they were. Dorrell wore his t-shirt as ‘advertising’ for it. 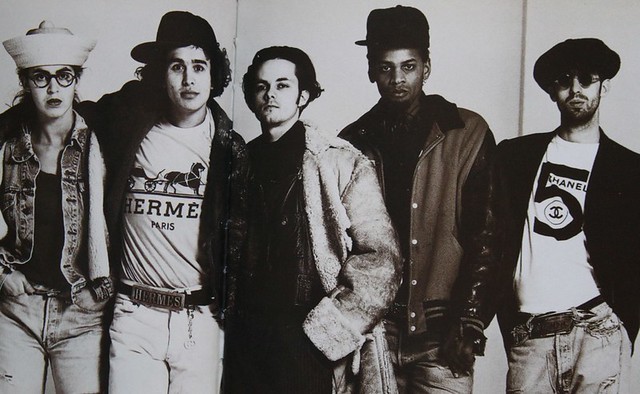 The Hermes t-shirt and belt were snide, the Chanel Number 5 t-shirt sported by Dave Dorrell were being knocked out by a group of friends. Young people in London co-opted brands just like the hip-hop artists heading to Dapper Dan’s in Harlem.

From 1980, surfer Shawn Stussy had been growing an clothing empire of what we would now recognise as streetwear. Stussy had originally came up with the t-shirts as an adjunct and advertisement of his main business – selling surfboards. But the clothing hit emerging culture: skating, punk, hip-hop and took on a life of its own. It went global through Stussy’s ‘tribe’ of friends that he made along the way.

Stussy is known for his eclectic influences and mixing media: old photographs alongside his own typography. In a way that was unheard of in brand circles at the time, Stussy manifested his brands in lots of different ways. The back to back SS logo inside a circle was a straight rip from Chanel; the repeating logo motif that appeared in other designs was a nod to MCM and Louis Vuitton.

All of this went into the cultural melting pot of world cities like Tokyo, New York, London and Los Angeles. Stussy went on to do collaborations from a specially designed party t-shirt for i-D magazine’s birthday party to the cover art of Malcolm Maclaren records. Collaboration with mundane and high-end brands is baked into streetwear’s DNA. 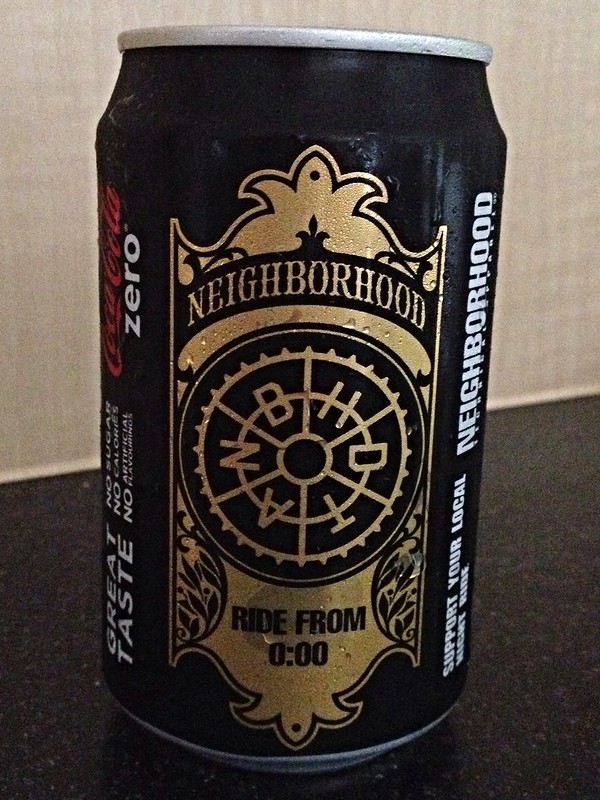 (Neighborhood x Coke Zero was something I was involved with during my time in Hong Kong.)

Japan with its engrained sense of quality and wabisabi took the Buffalo mix-and-match approach to the next level. Japan’s own streetwear labels like Visivim, Neighborhood, W-Taps, The Real McCoy and A Bathing Ape (BAPE) took streetwear product quality, exclusivity and price points into luxury brand territory. That didn’t stop BAPE from making a snide versions of various Rolex models under the ‘Bapex’ brand. 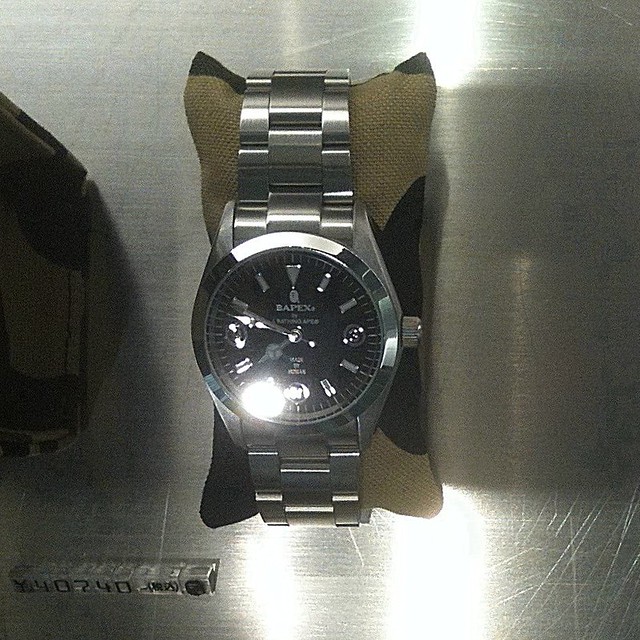 Some two decades later Supreme came up in New York. The brand takes design appropriation and homage to a new level. Every piece Supreme seems to do is a reference to something else. The famous box logo rips from Barbara Kruger’s piece ‘I shop therefore I am’. From taking a snide swipe at consumerism to ending up in the belly of the beast took Supreme a relatively short time. This heritage of appropriation didn’t stop Supreme from using legal means against people it felt had appropriated its ‘look’.

In an ironic twist of fate, Supreme was sued by Louis Vuitton in 2000 and yet the 2017 collaboration looks exceptionally similar to the offending items…

The last time I shared this story the page was just at 2k followers. With the collaboration officially announced today- and the page having 40k more followers since then- I figure it’s time to re-share. The year was 2000, and a 6 year old Supreme took their hands at referencing a high fashion brand as they did early on (Burberry, Gucci,) this time with Louis Vuitton. Box Logo tees (and stickers), beanies, 5 panels, bucket hats, and skateboard decks all featured the Supreme Monogram logo (pictured right). Within two weeks, Vuitton sends in a cease and desist and apparently, ordered Supreme to burn the remaining available stock. Clearly, many of the products from 2000 are still in the resell market, circulating today. Now we arrive at today’s FW Louis Vuitton fashion show. As most everyone is aware by now, Supreme is in fact collaborating with the luxury brand for a July- into fall collection. I’ve seen quite a few pieces from the collaboration (20+, check @supreme__hustle @supreme_access and @supreme_leaks_news for more pics) and it’s panning out to be Supremes largest collaboration to date. It’s interesting to see the references of both brands within the collaboration- from old Dapper Dan bootleg Louis pieces, to authentic ones, to Supremes monogram box logo and skateboard desks (pictured left). 17 years later and @mrkimjones proves that time can mend all wounds (amongst other things). Excited to see what all will release alongside this legendary collaboration. #supremeforsale #supreme4sale

North East Asia’s fast growing economies had been borne out of learning from developed market expertise, state directed focus on exports and ruthless weeding out of weaker businesses. Intellectual property was cast aside at various points. Korea, Hong Kong, Japan and China went from making knock-off products to displacing Europe and the US as the leading luxury markets.

Asian luxury consumers, particularly those second generation rich in China were younger than the typical customer luxury brands cater too. These consumers bought product as they travelled taking in style influences as they went. First from nearby markets like Japan, Hong Kong and Singapore and then Korea. This drew from a melange of hip hop, streetwear, Buffalo styling and contemporary western designers like Vivienne Westwood – as well as the more matronly styles of the traditional European luxury houses.

The luxury brands had to adapt. They brought in new designers who themselves were drawing from similar influences.  These designers also collaborated with sportswear brands like Alexander McQueen and Puma or Jeremy Scott and Raf Simons for Adidas.

Luxury brands got seriously into new product categories making luxe versions of training shoes that could be charitably called a homage to the like of Nike’s Air Force 1.

As the supreme_copies Instagram account notes the collaboration with Supreme and Louis Vuitton brings things full circle with the pieces having a nod to Dapper Dan’s custom work as well as Supreme’s own ‘homage’.  Luxury brand MCM (Michael Cromer München), which Dan borrowed from extensively in the 1980s was restructured in 1997 with shops and brand being sold separately. The brand was eventually acquired eight years later by the Korean Sungjoo Group. Korea now has its own fast developing luxury fashion and cosmetics brand industry. Textile city Deagu which was the likely source of Dapper Dan’s fabric is now a fashion and luxury business hub in its own right. The Korean entertainment industry is a trend setter throughout Asia. For instance, Hallyu drama My Love From A Star drove breakout sales for the Jimmy Choo ‘Abel’ shoe.

The only question I still have is why did a move like Louis Vuitton’s collaboration with Supreme take so long? The luxury brands spend a lot on customer insight, they were using social listening far longer than they had been on social media. They know that a customer wearing their jacket could have a Visivim backpack slung over the shoulder and a pair of Adidas Stan Smiths on their feet. Customers mix-and-match Buffalo style for all but the most formal occasions. For streetwear brands, collaboration is in their DNA and they get an additional leg-up in the quality stakes. More luxury related posts here.

Ray Petri
How Buffalo shaped the landscape of 80s fashion – Dazed
Dave Dorrell interview part one | Test Pressing
Dapper Dan
Barbara Kruger Responds to Supreme’s Lawsuit: ‘A Ridiculous Clusterf**k of Totally Uncool Jokers’ | Complex
Volume and wealth make Chinese millennials a lucrative target market: GfK | Luxury Daily
Just why are Louis Vuitton and other high-end retailers abandoning China? | South China Morning Post – although Chinese shoppers consumed 46 per cent of luxury goods around the world, their purchases in their home market accounted for only 10 per cent of global sales, falling from 11 per cent in 2012 and 13 per cent in 2013
How a Jimmy Choo Shoe Became a Global Best Seller – WSJ