I don’t know if I hadn’t been paying attention or if it hadn’t been put out there in the media about Plaxo closing down. Prior to Plaxo closing down, it provided a valuable service by syncing your address book to people’s profile cards which they changed if they moved jobs, changed their cell phone number or email address. It was clunky but the data in and out was more useful than LinkedIn or Facebook has been since. 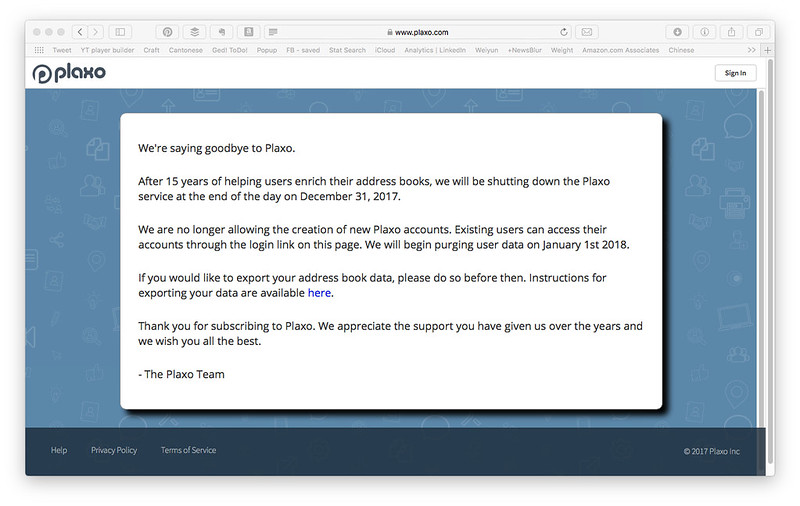 I gave up on it when it started to have issues with LinkedIn connections. Comcast had been running it quietly for a number of years but have evidently given up on it. It’s main legacy for me now is knowing the real birthdays of many contacts as this was before the web got quite as crime laden as it is now. Plaxo closing down is about the the decline of web 2.0 data portability and

This week I have been listening to Pleasure – the new single from Luxxury and this fantastic play list from Chicago legend Mike Dunn of the tracks which most inspired him.

Dunn isn’t as famous as Frankie Knuckles or Steve ‘Silk’ Hurley but has production credits on Sterling Void’s ‘Don’t Wanna Go‘, Julian ‘Jumpin’ Perez’ ‘Relight My Fire‘ and as an artist in his own right with the likes of ‘God Made Me Phunky‘.

Beautiful Japanese booth babe uses her fingers to create the Suzuki “S” sign on her chest 【Video】 | SoraNews24 – if I was a marketer at Suzuki, or one of their agencies I would be kicking myself for having not come up with this. I could totally see it becoming a brand meme