China Syndrome definition: a hypothetical sequence of events following the meltdown of a nuclear reactor, in which the core melts through its containment structure and deep into the earth. A term the American’s used to imply an accident so bad that hot nuclear material burnt through the centre of the earth and out the other side (to China). It seemed an appropriate metaphor of Mercedes recent marketing debacle.

A seemingly shallow innocuous social media post by Mercedes Benz managed to stir the passions of Chinese netizens. Many of whom broke Chinese law to jump the great firewall to complain on Instagram. A corporate meltdown ensued. 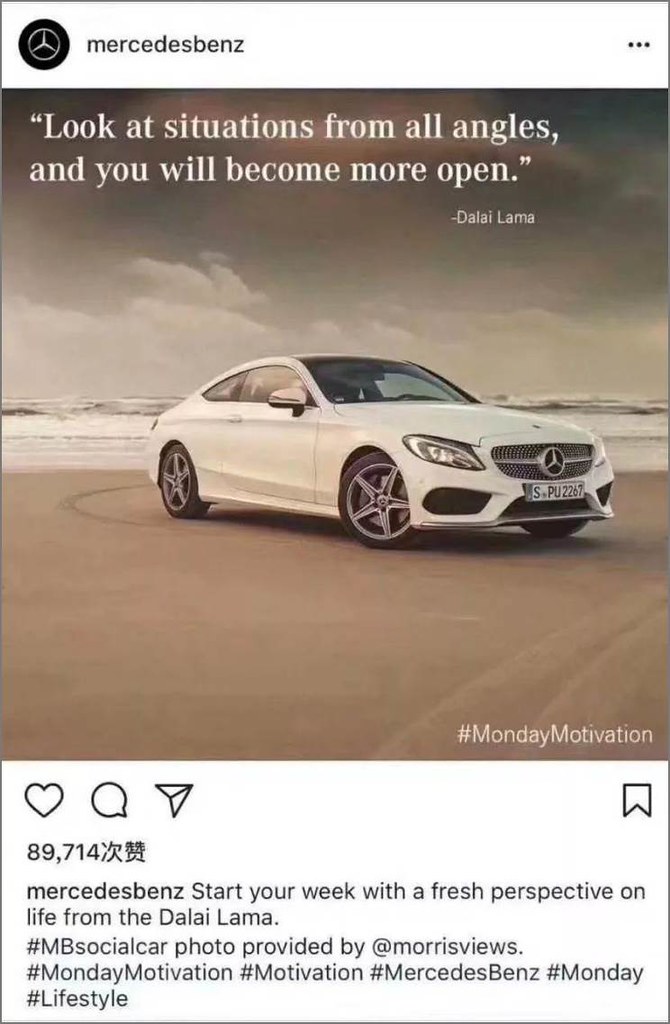 When one looks at it from a brand marketing point-of-view two questions immediately pop up?

Motivational quotes a tried and trusted tactic for social media marketers. But that doesn’t mean that they are any good. It really depends on what job the post is supposed to fill.

I can’t imagine that it would have driven a lot of sharing (controversy nonwithstanding) or greatly expanded the reach of the Mercedes Instagram account.

Motivational posts can performs really well if you are measured on engagement particularly in markets like the Philippines,Myanmar and Thailand. In the case of Myanmar, brand content serves as entertainment due to an under-developed media industry. Again I don’t know why the team would have been focusing on markets like this?

Where they looking to tap a wider audience and position Mercedes as a brand that one would aspire to own? In developing markets where the urban middle class drive Toyota its a possibility if they were focusing on Mercedes as a luxury brand (S-class, SL-class, GT, GLS and G-class models certainly are).

However those posts would be less likely to appeal to serious car buyers or petrol heads. Mercedes has a rich heritage in car-making and motorsport that it could have drawn upon instead.

I imagine the problem comes down to the way goals were set for the Instagram account. They may have been lacking a clear view of who they wanted their audience to be. I don’t have any insider insight so that’s about the best that I offer.

The Dalai Lama is a divisive figure. The Chinese view him as a ‘separatist’; whilst in the west he is respected as a religious leader and he comes across as an affable old man in media interviews. They view Tibet as an indivisible part of China.

The quote was published within a day of American motor manufacturer Dodge being criticised for using the words of Martin Luther King in an advert. A curious social media operative should have looked at the Dodge debacle and thought ‘what does this mean for my brand’? It doesn’t seem to have occurred and that is on the social media team involved.

Some times it is worthwhile going back to basics:

China is an ascendancy, in the same way that a post war-era US saw the rise of US influence around the world. President Xi  echoes Chairman Mao’s China has stood up quote. His power hinges on two things:

This means that a constituency of the Chinese population and the party is extremely sensitive to perceived slights, whether they were intentional or not. Chinese sensitivity to the world accelerated since 1999 when the US air force managed to bomb the Chinese embassy in Belgrade by accident.

I don’t think anyone believes that the Mercedes social media team thought about ways that they could offend the Chinese people – on a platform that is unavailable in China. It was negligence rather than malicious in nature.

February 6: Mercedes apologises on its Weibo account. Chinese netizens are still angry and want the apology to also run on Instagram. Mercedes is between a rock-and-a-hard place. Pissed off Chinese netizens, or pissed off netizens from the rest of the world

February 7:  A Chinese government spokesperson comments on the apology, with a statement that said in diplomatic language that it was prepared to get medieval on Mercedes Benz if necessary

February 7: Senior management in Germany send a letter of apology to the Chinese ambassador in Germany.

February 9: People’s Daily – a government newspaper often considered a herald for the Party describes Mercedes as an ‘enemy of the Chinese people’

February 13: Mercedes-Benz (China) Automotive Sales Co. will recall 1,886 imported S-class, C-class and GLC sport utility vehicles (SUVs) manufactured between July 2016 and December 2016, according to the statement. Its joint venture company Beijing Benz Automotive Co. will recall 18,893 C-class and GLC SUVs manufactured between October 2016 and February 2017. These recalls don’t seem to be mirrored in other countries, which is unusual for the 1,886 imported models – it might be a coincidence…

The main critics of Mercedes seem to be particular faction of it young people with extreme nationalist tendencies called 愤青 fenqing (said fen-ching).

They are a diverse group in terms of beliefs, but a simple view would be to think of the nationalism of Britain First supporters, but with Chinese sensibilities. They tend to come from lower tier cities and will have been less exposed to world beyond China.

Their antics are curbed through censorship and further actions when it suits the Chinese government. It is rarely desirable to allow the fenqing enough space to run unchecked.

When China was unhappy with South Korea; it chose not to curb protests and damage against Korean business Lotte by fenqing. Lotte owns the golf course on which the THAAD anti-ballastic missile system was placed to stop a North Korean nuclear attack on the South.  Chinese demonstrators closed Lotte stores throughout China, cause a huge amount of damage and forced Lotte to withdraw completely from the Chinese market. Those stores that weren’t picketed by protesters were closed down by Chinese local government department for (non-existent) fire code violations and fined over breached in advertising regulations. Chinese tourists boycotted Korea and Korean stores.

They will have been supplemented by students living outside China whilst attending foreign universities.

One has to consider Mercedes faux pas in context. It came on the back of apologies by Delta Airlines, Zara and Marriott Hotels when netizens realised that Taiwan and Hong Kong were treated as different countries on these websites.

In Marriott’s case it was an loyalty programme research survey that caused the controversy.

Posts like this one on Instagram have the comments section stuffed full of protests from overseas Chinese and their mainland brethren who have jumped the great firewall.

Join us tonight to experience the #InspirationCollective in person at the @mhmarquiswdc in #washingtondc. In partnership with @fastcompany, we are exploring the best of the #Recommender picks. Hope to see you there!

The government forced Marriott to close its site and app in China. In addition Marriott’s social channel went dark AND the company made an apology aimed at a global audience.

Their western social channels went dark for four days to a week depending on the channel. The implication in an article in China Daily the Chinese government ordered a shutdown GLOBALLY on Marriott’s social channels as part of the punishment.

“To regain confidence and trust, the first thing is to admit the mistake, then fix it, and it would come back slowly as we prove we really mean what we say,” Smith told China Daily in Shanghai on Wednesday, one day before the company’s digital platforms are scheduled to be back online.

What is conveniently forgotten is that the international websites of Chinese state-owned companies like Air China made similar mistakes.

Why did Mercedes apologise?

Chinese netizens weren’t going anywhere. They are angry and persistent.

Q: According to reports, on Monday, Mercedes-Benz quoted the Dalai Lama in an English language post on Instagram. Yesterday, the company apologized and deleted the post. Was this at the behest of the Chinese authorities?

A: I have seen relevant reports. To acknowledge your wrong and fix it is the simplest truth, universally accepted both in China and in other countries.

I want to stress that over the forty-year course of reform and opening-up, the all-around cooperation between China and foreign enterprises has not only boosted China’s development, but also benefited the latter. As the 19th CPC Congress ushered in a new era for China’s endeavors in various causes, a China in the new era will be more open and more confident. We will continue to pursue cooperation with foreign companies, and we are also ready to share China’s development opportunities with them. However, it is needless to say that they must observe some basic rules.

That’s diplomatic language for expect a beasting from the Chinese government and Chinese people for any perceived slights.

Mercedes-Benz probably looked around at what its peers with major exposure to the Chinese market have done. Marriott being the most obvious analogue. Marriott’s capitulation to the Chinese government was complete and global – even at the risk of provoking the ire of Donald Trump supporting Americans. They were one Donald Trump tweet away from American First outrage over their capitulation to China, but it was a risk that they were prepared to take.

It is worthwhile remembering that Boeing had a billion dollars wiped off its market value thanks to Donald Trump complaining on Twitter about the price of a new Air Force One plane. He has also shown an ability to mobilise his political base via social media.

The takeaway for many brand marketers in multinational firms, regardless of where in the world that they work is that they are the Chinese government’s pawn and they best get used to it. Chinese buying power has given the Chinese government the kind of exceptionalism that was previously only available to the US; then mostly because that was were many multinational companies were headquartered.

One has to wonder how long western brands will survive by bending to the will of the Chinese government when it wants its homegrown brands to expand globally?

Contrast Marriott and Mercedes’ behaviour with the rage-filled tone Huawei takes, particularly  in the US in the face of government criticism or negative partner actions.