The estimated reading time for this post is 336 seconds

My old MacBook Pro, which had seen me through a lot of work had been starting to show its age, so I changed it out for a new model. The process has been challenging at times so I thought that I would write about the good, the bad and the weird parts of this experience.

My new machine has taken a size bump to 15.4 inches. The largest MacBook I’ve had in the best part of ten years. The reason for the size bump was to try and retain a working days worth of battery life. From a size perspective the 13 inch machine suits me better but battery performance seems to be in retreat.

I had the opportunity to make a controlled move to the new machine, so I cleaned a lot of the data from the old computer. Trying to deal with as many duplicate files as possible.

Once this process was done I used Apple’s migration tool. This moves across data effortlessly. I’ve done this a number of times since running MacOS X back in 2002. This had to be done over wi-fi as connecting the two machines via an ethernet cable would be problematic.

I am a big fan of Incase’s hard shell that clips on to your laptop. It protects it from coffee smeared tables and the odd light prang. This is then covered in stickers like it has been bombed by a crack team of Japanese school children. 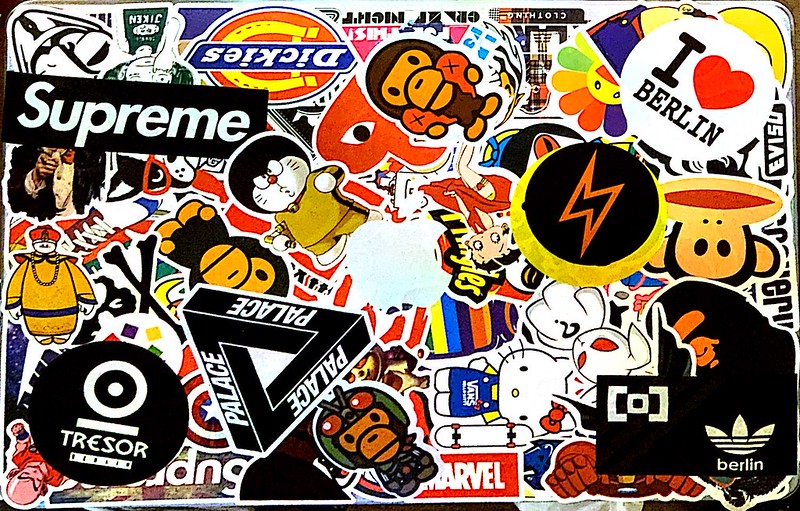 So why do I have a sticker covered laptop? A good while ago I had a client at a major telecoms sector company try and swipe my laptop in front of my eyes.

“Oh, I thought it was mine” they said whilst ignoring the Lenovo peeking out of their laptop bag.

Opening the shell up I fit a TechPrivacy web cam privacy cover. They look very thin and are fragile during the fitting process, but once on your laptop work perfectly and don’t impede closing the laptop up fully.

I use a torch to work out where the camera is and run FaceTime to check that I am not impeding the camera or the camera power light.

These new Macs are known for their keyboards. They feel unresponsive to a touch typist like me and seem to be prone to the ingress of any foreign matter. Keyboards are horrible grotty things swimming in dead skin, hair folicles and food crumbs. I can’t do much to make the keyboard feel better, but I have fitted a MOSISO Keyboard Cover to provide a bit of protection.

Finally, I topped this off with an Amazon Basics neoprene laptop sleeve. MacBook Pros are a hassle to repair, even with AppleCare+, the sleeve is a small investment.

I have series of chargers including an in-car charger and airplane seat charger designed to work with American market airplanes that I have accumulated since my first Intel MacBook Pro back in 2006. Some of the cables have a silicon holder and MagSafe 2 connector attached.

I have breathed a sigh of relief many times when my power cable has been snagged and not taken the laptop tumbling on to the floor with it. All of which are now useless given Apple’s move to USB-C. Unfortunately USB-C is not snag proof like the earlier MagSafe power connectors. Thankfully, I can still use the extension cables that I have. Apple doesn’t include them in the box with the laptop any more.

Some third party designers have trialled products that mix the best of USB C with a MagSafe like connection. Apple’s current solution feels like a petty and backwards step.

I mentioned early on that I couldn’t do an ethernet-to-ethernet connection for the data migration to my new laptop. The problem is that the new MacBook Pro only has five connection points. Four of which are USB C and the fifth is a 3.5mm headphone socket.

You need dongles for everything:

SD Card reader – you need a dongle for that. Apple has one that it will sell you.

USB connection, for when you want to connect your iPhone to your MacBook Pro…

HDMI connector – Choetech’s product seems to be well made

Thunderbolt 2 to USB C. Connecting to Thunderbolt 2 devices is a whole new world of pain. Apple’s own adaptor works inconsistently. Given that my home set up runs on two hubs connected to two Apple cinema displays all over Thunderbolt 2, this was critical for me to have work. In the end I found that StarTech’s adaptors whilst ugly, work a treat.

This means that as a mobile worker going in and out of agency spaces like I’ve been doing, you need a few hundred pounds worth of add-on dongles and power cords to get anything done. My laptop starts to look like a white legged arthritic spider rather than the slick working machine I previously enjoyed.

For mobile working, I’ve just started trying out a Pioneer Multiport adaptor that does VGA, ethernet, a single ethernet port and HDMI. It’s not particularly elegant but is also pretty cheap.

A migration that hits the pocket and your time

Migrating to the new MacBook Pro machine has been a major investment in peripheral hardware and a time suck in order to tune the set up to work properly. There has been much to say about good design.

Good design (with a huge debt to Dieter Rams):

The MacBook Pro fails on many of these attributes.