The estimated reading time for this post is 193 seconds

Thinking about SnapperMail takes me back to end of 2001, I started to prepare for leaving my job at Edelman. This meant upgrading my home IT set up. I picked up an iBook. The iBook was Apple’s consumer-orientated laptop made from 1999 to 2006. Mine was a second generation ‘Snow’ laptop with a G3 processor, dual USB sockets and a combo drive which allowed me to watch DVDs and burn CDs.

I used the move to go on the first version of OSX. The move also meant that I got a new email account, my default account to date. It had two key attributes:

My iBook was my only source of email access whilst I left Edelman, freelanced, and then eventually joined Pirate Communications. My first smartphone was a Nokia 6600, which I used alongside a Palm  PDA – l got this sometime around the end of 2003. The 6600 supported IMAP out of the gate, it was slow, but I was connected.

The process wasn’t smooth. The Treo was sufficiently fragile that I got a translucent silicon jacket that worked surprisingly well with the keyboard and screen protector to look after the touchscreen. Software wise the Treo 600 was a step back from the Tungsten T3 PDA. The screen was smaller and the software felt sluggish in comparison. I had deliberately chosen the 600 over the 650 because I had previously worked agency side on the Palm account and been a long-suffering device owner so knew how crap they were at bug fixes on new devices. The media didn’t call the former Palm CEO ‘Mad’ Bill Maggs for no reason (just sayin’). 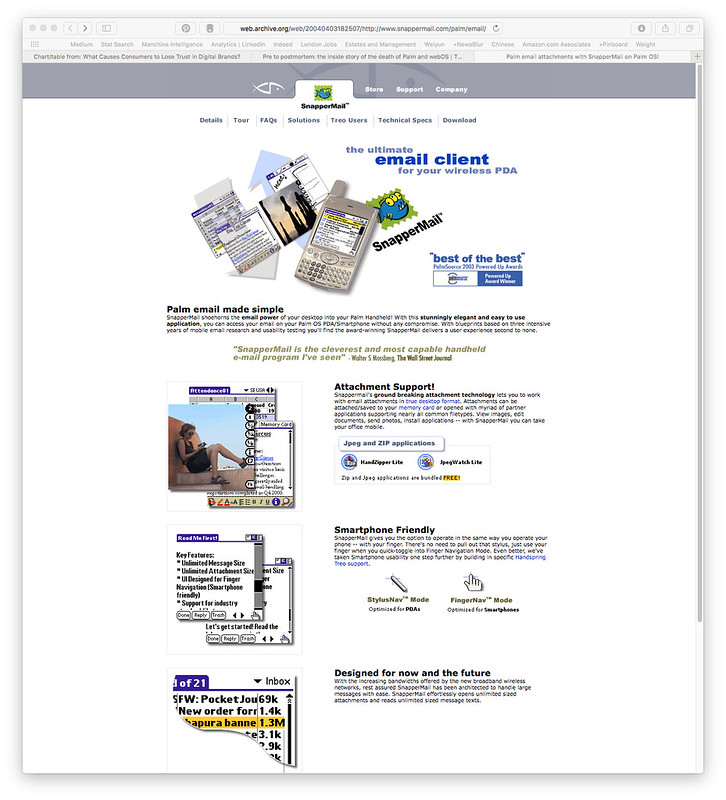 Unfortunately Palm had not been as progressive in comparison to Nokia with its default email client. The software didn’t support IMAP. Fortunately I used to follow Mitch Kapor’s blog and he had recommended SnapperMail: an app from a small New Zealand company SnapperFish.

SnapperMail was a compact modern email client. It has a number of features that we would expect now:

This looks like the kind of technology you would have thought Palm should have done. At the this time Palm were competing against Microsoft Windows Mobile 2003, BlackBerry 6200 series, 7100 series and early 8700 series. Yet the default email client was back in the 1990s.

I used this alongside MetrO – a public transit directions app and QuickOffice Pro – to read Office documents as part of my modern smartphone experience. It wasn’t just me that loved SnapperMail, it was praised by Walt Mossberg back when he wrote at the Wall Street Journal.

SnapperMail won two Palm Source (Palm’s software licence business) Powered Up awards in 2003. It was recognised as Best Productivity and Best of the Best Solution. More on Palm here.