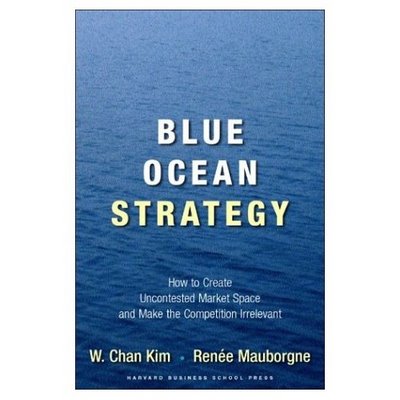 Blue Ocean Strategy is an easy to read book that I managed to zip through in next to no time at all. Kim and Mauborgne have written a book that is accessible and easy-to-read, cover-to-cover or dip in and out of for reference or inspiration.The book’s premise is that most business strategy books are about conflict and competition and this is wasteful. Instead it provides a framework for strategists to Think Different and differentiate their businesses instead.

The blue ocean of the title is the space that the business puts between itself and competitors, in contrast to the red ocean from business conflict. A classic example of a red ocean would be the Chinese approach to business. In China you will see competing restaurants right next to each other. The idea is that one might move in. It becomes successful, which encourages others to compete next to them since it is a known successful formula in that area. The neighbourhood of restaurants does bring in diners, but margins are small due to the level of competition.

A classic example would be to think about the PC manufacturers. A classic red ocean environment where IBM left due to competitive pressures, HP and Compaq merged to unsuccessfully in a failed effort to leverage the economic benefits of their combined scale and Apple and Dell are the only two long-term profitable success stories through innovation.

The problem is now that Dell’s process smarts have become the norm and both Apple and HP have used their operational efficiency techniques to improve their own businesses with leaner supply chains and total product customisation.

I wholeheartedly recommend Blue Ocean Strategy. However the type-a personalities in charge of many organisations that most need to read it, will never touch the book or hear its message and as the bard said there-in lies the rub. More book reviews here.