The estimated reading time for this post is 307 seconds

My experiment with the Apple Watch is part of a larger project. I  decided to experiment with wearables a while ago. My first experiment was with the Casio G-Shock+ series of watches that takes the well-loved brand and drops some rudimentary notification function, BlueTooth LE capability and a companion iPhone app together as a workable but unambitious package.

I was surprised to be presented the box by security in reception, mainly because it had roughly the same size and weight as a toner cartridge for the office colour photocopier / printer. 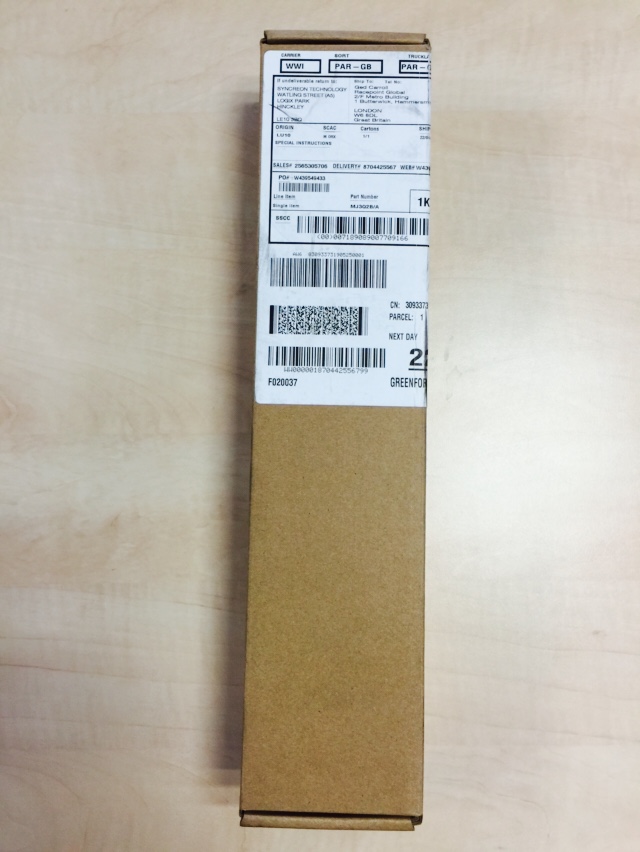 My immediate reaction was that Apple may have made the packaging look like this to mask the first drop of watches from over-ambitious eBay entrepreneurs in the postal service. 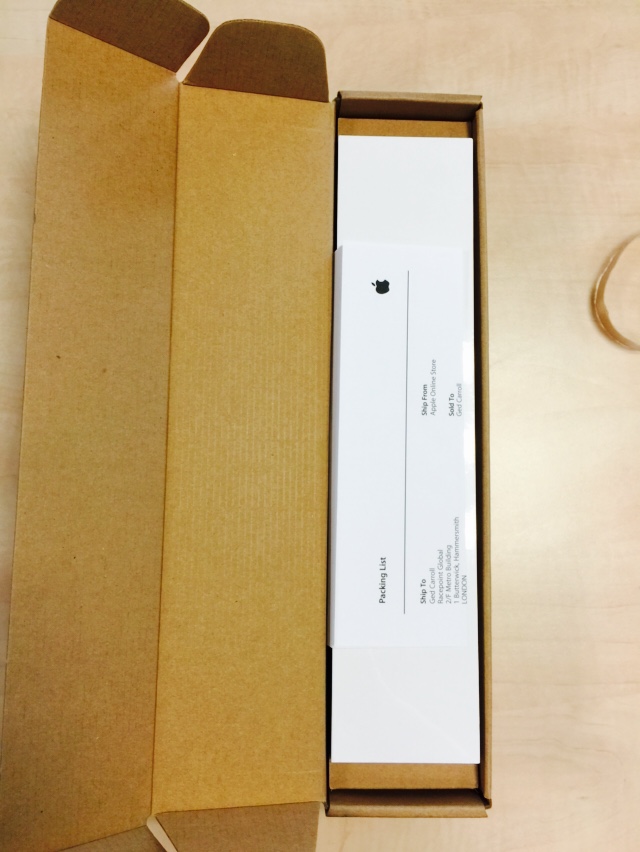 But it soon became apparent that Apple had built a packing equivalent of a Winnebago RV for the watch. 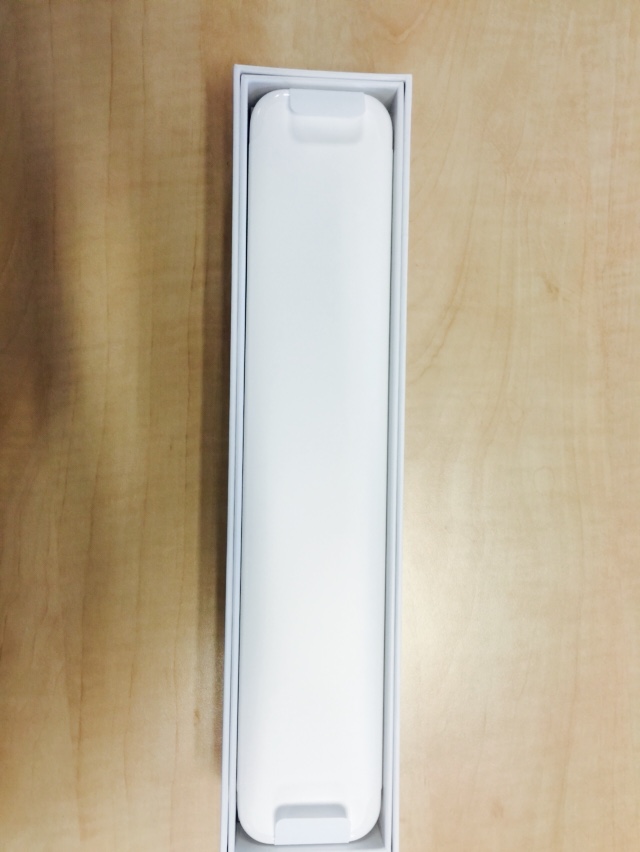 Inside a long heavy duty cardboard box is a giant whale of a coffin for the watch and space underneath for the charging cable and plug in charger. All of this seems at odds with Apple’s move over the years towards less wasteful, more environmentally friendly packaging.

At the same time the experience didn’t feel special to me, just slightly perplexing, ok very perplexing. I have been involved in the launch of a new Huawei smartphone over the past few weeks and that packaging provided a more luxurious experience.

An email arrives to my home account letting me know that I can set up a live video call with someone who will help me set up my watch. An alarm bell rings in the back of my head that makes me think that the product might not ‘just work’ which the a core tenet of the Apple experience.

The watch itself has some nice industrial design touches. 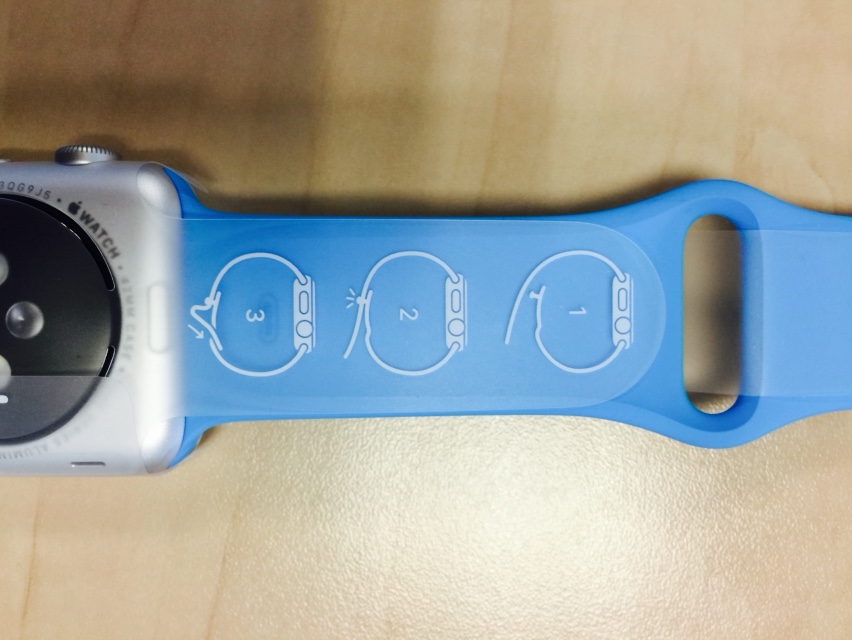 The Apple Watch strap was easy even for a mechanical klutz like me to change, by pushing a button and sliding the strap in or out of a groove on the case.

The case is nicely made (as something the price of a premium Casio or Hugo Boss watch should be). However as a bit of a watch head the case did not blow me away, if I didn’t know about it’s smarts it felt very much like a Fossil watch.

Switching it on and pairing it with my iPhone was very easy, the problems began when the iPhone app schlepped across all my iPhone applications that had Apple Watch capability, without a thought for how often I use them. This means that the home screen is covered in an acne rash of default and third-party applications, 80 per cent of which I don’t regularly use.

Whilst I am in awe of the the way the device hides the process of syncing with the iPhone I am less impressed by the slow speed of glance content loaded from the iPhone more slowly than it would be to just take the iPhone from my pocket and look. 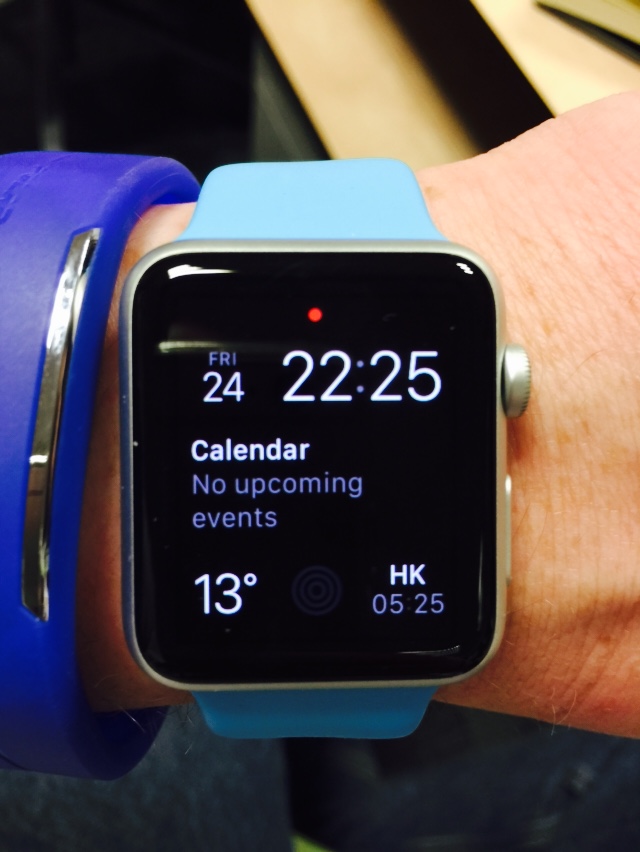 When glances do appear, they appear in an amazingly high resolution.

The haptic alerts were handy and Accuweather had made the best Watch app. WeChat shamed Twitter with its comparative usefulness. But ultimately I still don’t know a compelling reason to own an Apple Watch beyond trying to understand where it fits in a customer’s digital life.

The Apple Watch is a two-handed device, for instance unlocking the Watch by typing in your PIN. Flashback to a childhood encounter with a friend’s Casio Databank flooded my memory whilst unlocking the watch.

I found that I tended to use the crown when the watch wasn’t on my wrist, probably sounds a bit pointless.

Like the Casio G-Shock+ before it, Apple hadn’t mastered prioritising alerts or putting intelligence behind them. I think that this a major issue, since app developers will try to go for maximum notification real estate as part of the ‘grab’ of the attention economy. I think that this is an Achilles Heel of wearables in general.

The Apple Watch didn’t encourage me to ‘play with it’ to find out its features, the way other Apple products from the original sit-up and beg Mac to the iPod and iPhone did. I can’t say that I have had any real enjoyment out of using one. So much so, that I was quite happy to leave it in its charger most of Sunday, whilst my iPhone is never an arms length away.

It isn’t particularly friendly to use and at 48 hours in, I still haven’t really got to grips with the device.

This feels like a first step in a long journey needed to fix the human smartwatch interface.

The Apple Watch feels like a solution looking for a problem, just in the same way that the Mac only found its calling with Aldus desktop publishing software and an Adobe powered laser printer, so the Apple Watch is dependent on some clever app development in the future.

I suspect the kind of programmable world that we would need for the device to thrive, for instance your iPhone seeing that you have enough time in your diary, ordering your morning coffee at Starbucks and then the Watch telling you to step in the cafe and pick it up just as you are about to walk past doesn’t exist yet.

The experience did get me to marvel at the engineering that went into the device, but at the moment it feels that all that effort has been largely unrewarding in terms of customer experience. I still wear my collection of G-Shocks or fine Swiss watches on my right wrist. I don’t think that many watchmakers have much to worry about yet, except those targeting the mid-market of big brand, mediocre movements.

On smart watches, I’ve decided to take the plunge
On wearing a smartwatch
On Wearables