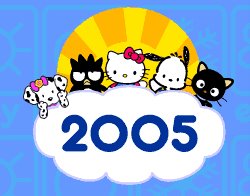 Bez won Celebrity Big Brother, ten years after the peak of the Happy Mondays. London creative team Lee and Dan made an Al Qeada inspired calling card for Volkswagen that managed to leak out on to the web. Analysts at Credit Suisse First Boston won the monthly award for stating the bleeding obvious. We did a bit of homegrown analysis with the help of information from Popbitch to work out just how much News International made from the Prince Harry Nazi pictures. We also found that the Watchman character that the rc personality most resembled was The Comedian, more details on testing your Watchman Personality Inventory here.

Words of the month were Mum Truck and KAGOY (kids get older, younger). Hunter S Thompson killed himself and half the media world pretended that they were avid readers of his work. The books of the month were Michael Collins by Tim Pat Coogan and The Electric Kool-Aid Acid Test by Tom Wolfe (another pioneer of the gonzo school of journalism). The US Army released details around its successful word-of-mouth marketing campaign to attract recruits. America’s Army a realistic 3D game garnered interest in soldiering as a career and was far more fruitful than their television advertising campaigns. Bob Cringely highlighted how 25 billion USD needed to be invested by VC funds in the next 18 months or else they would lose their management fees. This of course wouldn’t have anything to do with the bubbling up of Web 2.0 would it? Carly Fiorina was finally ousted from H-P much to the relief of its employees. Sci-Fi London hosted a fantastic all-nighter of Shaw Brothers classics including Super Infra Man and Monkey Goes West.

renaissance chambara turned 1 years-old. Forrester mapped out trends in consumer electronics for 2005. March’s word was Search Arbitrage. Seymour Hersh highlighted the Pentagon’s plans for axis-of-evil club member Iran. Hersh’s pioneering journalistic approach contrasted with general media malaise. The Sony PSP picked up a lot of interest on the web with some hailing it as the new iPod, I don’t think so…. And most importantly the rc towers local pub got recognised as Pub of the Year by the Evening Standard.

PR gossip blog Spin Bunny was shut down for the first time as an unnamed PR agency called in the lawyers. Red Bull’s Art of Can exhibition brought a bit of culture to the Truman brewery. Word of the month is Kronenbourg. H-P manages to launch survey results that make them look foolish. There was less content overall as we were burning the midnight candle at work.

Flying Records, one of the UK’s foremost dance record shops finally closed its shutters after ten years at the forefront of the scene, however its spirit lives on as Andrew Baker now champions new tracks online working for distributor Goya Music. Palm launched the LifeDrive and it didn’t look that impressive compared to an iPod, retail therapy was thus avoided. Michelle Delio was found to have made up some of her stories that she contributed to Wired News. The word of the month was Sachet Marketing.

Country Music Television appoints a vice president of Dukes of Hazzard in a brilliantly executed PR campaign to promotes its re-runs of the original series. Omega releases its Planet Ocean watch – the watch that the Seamaster should be. WTF Apple goes Intel! Web 2.0 starts looking bubblicious. It was a few months since the Miami Winter Music festival and the Ibiza season was just starting to kick-off so a bumper month was had in the vinyl stakes. Michael Jackson is found not guilty, but the court of public opinion isn’t so sure. The word of the month is Mommy Consultant, Burson-Marsteller’s phrase e-fluential missed out because it was too close to effluent and we wouldn’t want you to be under the opinion that we thought all bloggers were full of sh!t now would we?

Cracks start to show in the eBay edifice. Fatigue for consumerism starts to set in. Coke rolls out their Love poster campaign, arguably the best piece of creative this year. The ongoing rising price of oil gives Hubbert’s Peak a mainstream audience as consumers wake up to the fact that oil isn’t going to get any cheaper or more plentiful. The New York Times celebrated the tenth birthday of e-commerce.

Wired issues its ten-year netrospective ‘celebrating’ the original of the bubble with the Netscape IPO. Citizen journalism sees its first cynical cash in with the launch of Scoopt, a picture agency for the general public and their camera phone. Paparazzi sleep easy though. Music industry bodies blame everybody but themselves for the continued under-performance of their industry. Bob Cringely launches his NerdTV series of interviews and Stussy’s 25th (XXV) anniversary collection is full swing. Towards the end of the month I managed to survive Silicon Valley. In Utah, the heavy mob is used to deal with kids listening to repetitive beats in an incident rather like the infamous police raid in Nelson near Blackburn back in the day. I am sure American’s everywhere feel safer already. The harvest of quality dance music on an acid house tip.

Chigger is the word. Nick Love’s film The Business reminds us why the 1980s were so good and so crap at the same time. Palm previews a Windows device, Dell stumbles and I try hard not to snigger, its especially hard when some bright spark calls Dell’s answer to the iPod Shuffle the Dell Ditty and styles it like a Ronson lighter. Apple launches the iPod Nano and gadgeteers recoil in horror from the Motorola ROKR. Nestle re-releases the Texan bar. Geek-in-chief at Sun Microsystems, Jonathan Schwartz, appeals to the troops to stop leaking confidential news via their blogs; via a blog!

Designers Burro shut up shop, while Criminal opens a Covent Garden boutique and Matmos see sense and re-release the Telstar lamp. Disgraced analyst Harry Blodgett starts his own blog. Super Southerner is the phrase of the moment. Spin Bunny gets shut down for the second time, this time it looks like its permanent as the entire site is removed from Typepad, speculation is that a South Bank based agency was responsible for letting loose the dogs of law. The tune of the moment is Tiger Stripes – Spirited Away. In a pre-Halloween push Burger King’s clumsy viral marketing efforts get unmasked by Slate.

Lynx launches a bespoke perfume in conjunction with Oki-Ni, research shows that music downloads have plateaued proving the proving the point that you can only buy so much crap. Talking of crap, Hypercolour looks like it may be making a come back. AOL makes its first interesting move in years by taking TV to the web and my even have a good business model. The word is Shorty (at least according to DJ Tim Westwood).

Christmas comes in with a whimper and Sony messes up a street marketing campaign for the PSP. rc floats the concept of a media bond and futures market to capitalise on the digitisation of content, the long tail and too much sloshing around waiting to be invested. Bootlegs mixes of Aretha Franklin and Pink Floyd move the feet so that the mind will follow. The word of the month is Uncanny Valley. Designers Terratag have some awesome gear in their latest fashion collection. Amazon take a Hermann Goring approach to email marketing in the final run-up to Christmas. A brief trip to Ireland left me with a number of contradictory observations about the state of the Celtic Tiger.