Sometimes the most straightforward posts take the longest to write. When I started on this one last week the big question in the minds of people who watch the big advertising conglomerates is are WPP numbers a company problem or an industry problem? 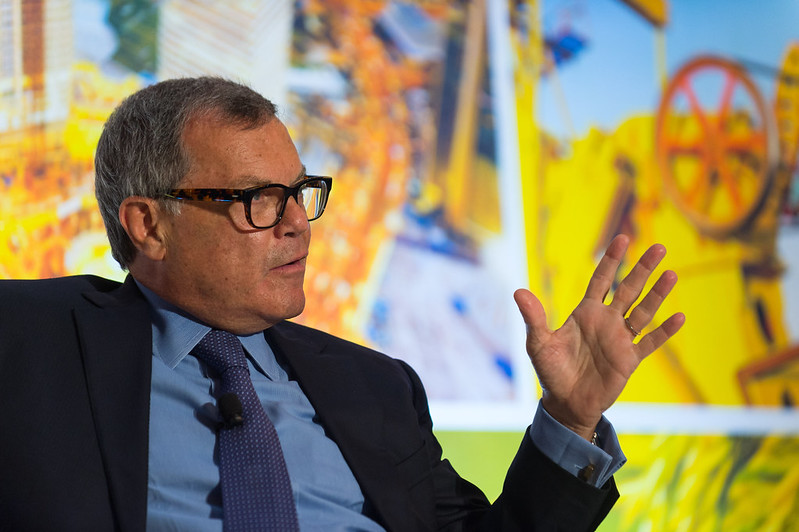 WPP is looking to simplify its structure with a view to becoming a more agile and transparent business from a client perspective.

Or as it was put in the New York Times

WPP plans to accelerate a programme to simplify the business by aligning digital systems, platforms and capabilities to provide bespoke teams for its clients as opposed to the different agencies that currently compete with each other to win contracts.

Other conglomerates, notably Publicis had already started on this path when it started realigning the group under the ‘Power of One’ vision. WPP is bigger with a fuller offering and wider range of specialisms than many of its peers, no one can be under the illusion about the size of this undertaking.

Let’s talk about the tectonic plates shifting around beneath the feet of ALL  the large advertising and marketing combines:

The tectonic plates are:

The Four is a label that Professor Scott Galloway put on Apple, Amazon, Google and Facebook. All of whom he considered to be monopolists that created value for their shareholders by putting the ‘real world economy through a shredder.

In this case I would swap out Amazon and Apple for Alibaba and Tencent, but the allusion to a quartet of horsemen portending a digital apocalypse is a useful allegory for the advertising and marketing sector.  Amazon deserves a section of its own later.

Galloway’s predictions of their destructive power led to an accurate prediction of WPP’s share price tumble this week. (see the video below)

Correlation does not prove causality however — it doesn’t mean that he got the right numbers for the right reasons. 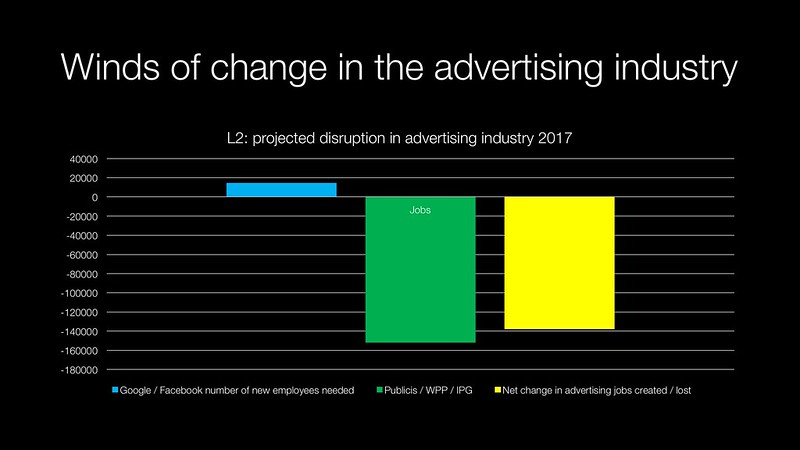 L2 came up with this research last year based on Google and Facebook revenue targets. If they hit their numbers they would be treating around 14,193 jobs. But it would mean that the corresponding projected number of jobs lost in the advertising industry would be roughly the equivalent of every man and woman around the world employed at vehicle maker Nissan. And that’s just 2017.

L2’s calculations don’t take into account China where the advertising industry has been digitising at a much faster rate than in the west with the bulk of growth going to companies controlled by Tencent or Alibaba.

Given that most of the agencies within WPP and its peers operate on a billable hour model; this represents a considerable potential loss of value. Since the number of people directly equates to revenue.

The consolidation of online media also means that many clients will look to take back control of their media planning and buying process. The argument goes something along the lines of ‘a consolidated media landscape allows for consolidated buying by a global media trading desk due to the inherent simplicity in suppliers. The data comes from the inhouse data management platform and the media vendor (Facebook, Google, Tencent or Alibaba)‘.

The always on creative needed to fuel this process is also being increasing done in inhouse studios, in partnership with their creative agencies as a kind of hybrid model.

This is what Marc Pritchard meant when he talked about taking back control of Procter & Gamble’s marketing as part of a process to save $1.2bn by 2021.  In the latest financial results, WPP claimed that their media buying margins had not suffered – only creative had.

At the time of written Jeff Bezos is worth about 112 billion dollars, or just under double the annual defence budget of the UK for 2018. Amazon impacts the advertising and marketing industry in multiple ways.

It is starting to become a big player in online advertising in its own right. I think it would be fair to say that this competition to Google is welcome for the marketing conglomerates judging by Sir Martin Sorrell’s commentary on the likes of CNBC.

Amazon has decimated the high street. Toys R Us, Borders Group, Tower Records, Radio Shack, Maplins are just some of the names which have disappeared. It took a good number of years for people to realise that retailers are locked in a zero sum game when Amazon competes against them. Amazon has unique access to exceptionally cheap capital via its shareholders. There have been companies who have beaten it back like Alibaba’s Taobao and TMall in China. But the company has built up a huge amount of retail power and decimated brands that would have been advertising agency clients.

Amazon has become the default search engine for buying things. This has already displaced up to 20 percent of Google searches depending on whom you believe. It also means that they can place imitation goods and private label goods against branded products.

Amazon has got great data. Amazon has data at the centre of its business what consumers like, what they don’t like, what sells well on marketplace resellers. This has driven a number of the product decisions:

Depending on your brand category the answer may be:

All of this impacts the advertising sector. For more information on the power of Amazon, I can recommend Scott Galloway’s The Four.

The decline of brand marketing

The relative decline of brand marketing has been driven by a number of factors, some of these factors are good and some aren’t.

Let’s talk about the good reasons first of all.

It isn’t about one approach over another but finding balance that works for sales now and in the future.

The rise of digital advertising has seen business services expand ways that we couldn’t predict. Advertising agencies like Ogilvy understood the potential for digital early on. Consultancies were focused on systems integration and the use of technologies to change business functions. As they became interconnected internally and externally; the progression into marketing made sense.

A reduction in creative budgets caused marketing agencies to move into areas like service design. Consultancies have looked to inject creativity into their values and skills set by mirroring the kind of acquisition strategy that built the marketing conglomerates.

In the meantime technology companies, notably Adobe have treated marketing like any other business function with a sale conducted at the c-suite level just like Oracle or similar. In many respects this move is understandable as companies use a data management platform (DMP) to derive audience insights and improve their digital marketing. This isn’t vastly different from historic data warehousing and data mining applications.

The enterprise software companies allow large companies to do internally what they have previously asked media agencies to do.