Google I/O 2016 happened on May, 18 – 20.  There had been a lot of pieces of coverage about the different products and services released. But I wanted to spend a bit of time reflecting on what Google I/O 2016 told us about their viewpoint on technology.

Google knows as well as anyone that the app moves towards a maturity model where consumers stick with the core apps that they want and then don’t go any further. 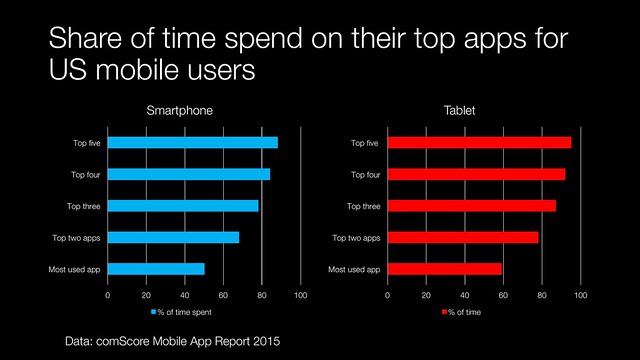 Data shows that consumers use their top five apps 88 per cent of the time. So why would Google care when it knows that 60 percent of the top apps on the Android platform?

The reasons for an expanded app usage include:

Streaming or ‘instant’ apps is part of Google’s efforts to encourage consumer trial of new apps and enhance relationships with developers. Firebase, it’s new analytics platform for mobile developers helps them have a better relationship with their installed user base allowing them to use data to target notifications and campaigns.

Android Wear’s updates were interesting. Put simply Google has more faith in data being delivered in a timely manner over cellular or wi-fi networks than it does for inter device transfers over variants of Bluetooth. Both the Apple Watch and Android Wear products suffered from performance lags when the watch was a thin client of a phone. Having a cellular radio on board the phone presents challenges with battery life, but speeds up real world performance.

The original design failure wasn’t down to network performance, but is likely to have implications for personal area network technology like Bluetooth in its different variants or ZigBee. These technologies are all about scale, lose a scale advantage and it poses a problem for future adoption by others. This can happen in a virtuous way. Apple’s adoption of USB benefited the standard greatly and drove interest in peripheral development for both Mac and PC. Apple’s abandonment of FireWire and the 3.5″ diskette marked their decline.

Lots to be concerned about from a privacy point of view?

Google Home moved yet another pair of Android powered ears into our environment. It was obvious from Google’s description of services that a paid marketing model to be the ‘car booking’ or equivalent service of Home could be very lucrative for the search giant. How this device could be used for market research, tracking brand mentions or government surveillance also poses some conundrums moving beyond smartphones to brown goods.

Android N features file based encryption rather than treating the whole device as an encrypted disk. This raises questions around the comparative ease of access from a privacy perspective. Secondly, SafetyNet allows Google to reach into a phone to remove pre-existing applications without user permission. There is no explanation if they also have write privileges to the phone as well. If so, expect law enforcement and intellectual property owner interest. From the way it reads this would affect apps and content that have been side loaded as well as got from an app store.

Android is giving the high ground to Apple on privacy presumably because it considers its own customers don’t care about it that much.

Reference designs in VR to drive adoption and commoditisation

Google’s Daydream project looks to provide standardisation in hardware. By going down this route, Google hopes to spur on the sensor market required for improved AR experience and drive uptake. These will likely be a very different experience to the computer workstation powered Occulus Rift. Driving this technology into the smartphone market may combat the current stagnation in phone sales growth.