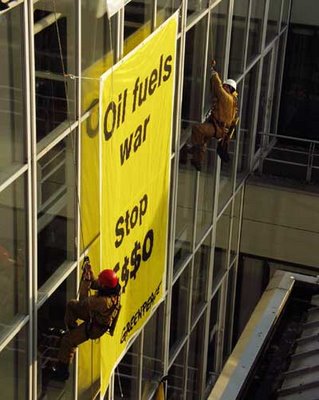 Greenpeace has been hauled over the coals with allegations that the large multinational pressure group used classic spin tactics of lies, disinformation and sensationalism. Roughly Drafted has gone toe-to-toe with the well financed pressure group to press for the truth around their greener electonics campaign:

The PR problem for Greenpeace is pretty simple, once they start being discovered using such underhand tactics they will appear less credible and start to lose the funding and goodwill they need to make some of their more valid campaigns and devalue what dedicated supporters have already achieved.

Roughly Drafted also cites well known mistakes by the large multinational pressure group including damaging a healthy coral reef in the Phillipines because they had the wrong maps and a series of lies told during the Shell Brent Spar debacle.

As media becomes more transparent with the blogosphere, both corporates and not-for-profits cannot afford to step out of line.

This time Greenpeace did not ignite the kind of media furore that Edelman and Wal-Mart caused, but if they keep on going they may be on the receiving end of protestors both online and in ‘meat space’.

Greenpeace relies on the fact that it is doing the right thing to protect them and most corporate won’t go toe-to-toe. However that doesn’t mean that individuals and activist organisations won’t.

Think about it this way:

Sounds like a large corporate in structure and behaviour?