The estimated reading time for this post is 126 seconds

The Bluetooth SIG (Special Interest Group) put together some PR-able research on what consumers think about the smart home.

Methodology
First of all the methodology:  online survey of over 4,000 US, UK and German consumers. The sample size is better than many, however I don’t know if the sample was self-selecting or what kind of biases might be in there. Since it was gathered solely online one has to have a certain amount of skepticism on sample make-up. But to do this as a telephone survey, they would have had to make in excess of 170,000 phone calls to get the 4,000 respondents to the smart home research.

The nature of the questions means that answers are prompted which would again affect consumer attitudes rather than open answers which are then categorised.

Finally, some cultures (like the Japanese) are much more accepting of technologies than others. Home ownership differences will also add into the mix depending on the depth of capital expenditure required to deploy a given technology. Renting is much more common in Germany, the UK has an aspiration to purchase.

How valid are consumer opinions?
In evolutionary products such as a new chocolate bar or toilet roll, consumer opinions on developments make more sense than a largely unwritten future a la the smart home, as Steve Jobs is reputed to have said:

“It’s really hard to design products by focus groups. A lot of times, people don’t know what they want until you show it to them.”

On to the results
They put together some nuggets of data from the questions as diagrams, the most interesting was 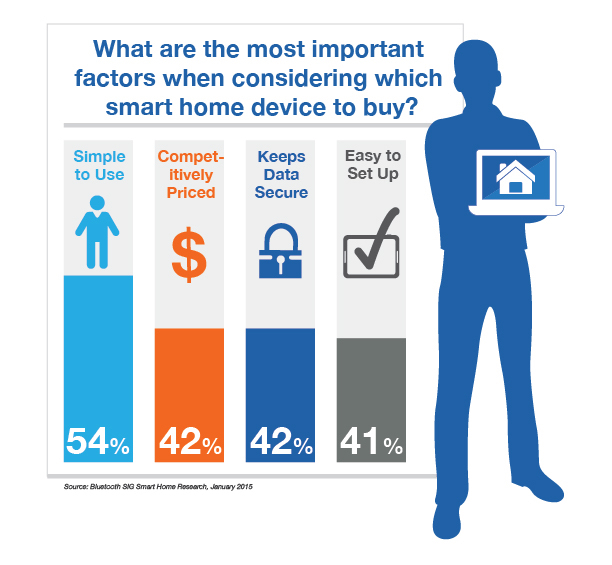 Ease-of-use is an interesting, but largely predictable response. I guess useful was assumed rather than asked in this question.

There was a comparative lack of interest in smart appliances in comparison to smart environment controls (lighting, HVAC and home security). I suspect that this is partly because ‘smart’ technology has rolled out first in offices with touch control A/C and motion-controlled lighting – where respondents have been exposed to it.

The thing that puzzles me is why one would want to control some of this smart home technology via the internet. Something like smart lighting doesn’t need to connect to a cloud but instead use local sensors whether it is a Bluetooth MAC address or infra-red heat signature that moves. More gadget related content here.

More information
From Sci-Fi to Reality: Almost Half of Consumers Think The Smart Home Will be Mainstream in Five Years
Bluetooth SIG (Special Interest Group)