New York public transport gets into the spirit of Halloween. Halloween in the US is based on the Irish traditions, but the US spirit of Halloween that have been expanded and adapted to the new world over time. More here – MTA Making Subway Scarier Than Usual This Month – Gothamist – to be fair you don’t need to get on the MTA during Halloween to see strange and sometimes scary things. You all New York life there.

Great profile on the director of The Host and Parasite: Bong Joon-ho profile: How the Parasite director is weaponizing the blockbuster. Mr Bong’s work is inherently political in nature, which is at odds with the international popularity that he has received. Parasite is about class and inequality. The Host was a commentary on the US military presence, large Korean corporates and the opaque nature of Korean government.

Interesting public safety campaign – How the patron saint of chimney sweeps is saving lives in Poland | Creative Moment – Poland is still a very Catholic country so this was an interesting adaptation.

Taylor Herring tried to use Airdrop at the recent PR Week Awards to try and solicit job applications. Its a variation on a theme of Bluetooth spam the was popular in shopping malls 15 years ago or so. I suspect that main effect will have been to build a mild degree of buzz around the Taylor Herring employer brand rather than active solicitation of candidates there and then. 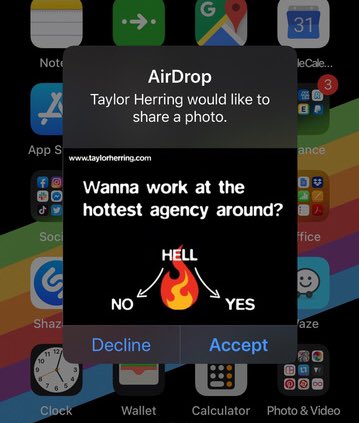 Sanrio have had a cash machine in terms of Hello Kitty for decades. It was only a matter of time before she became a YouTube blogger. This allows Sanrio to continue supporting the franchise whilst reducing the cost of media production. Its a major win for YouTube that desperately needs brand-friendly, child friendly content. Though I think that it will attract viewers of all ages.